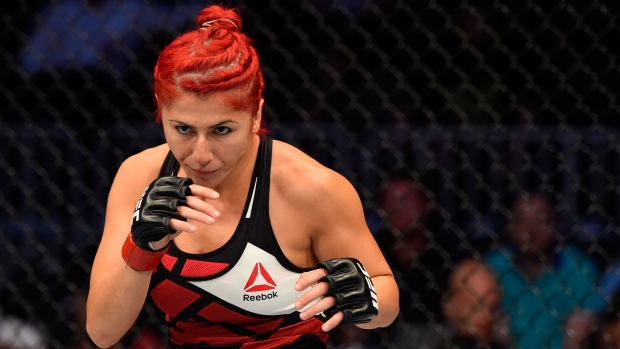 Markos had lost five of her previous six fights.

"This was a make-it-or-break-it (fight)," the 36-year-old from Windsor, Ont., said after the bout. "That's it. This entire camp was I'm not ready to move forward, I love this. This is everything for me. Ever since I was young, I've been fighting. Not just with MMA. Just my whole life I've been fighting. This is what I do and this is what I love to do and I have to remember that. That's why I'm here."

In the main event at the UFC's Apex production facility, Marvin (The Italian Dream) Vettori won a unanimous 48-46 decision over Paulo (The Eraser) Costa. Brazil's Costa is ranked second among middleweight contenders compared to No. 5 for Vettori. But the bout was contested at light-heavyweight after Costa arrived overweight for fight week.

Markos scored with some elbows in the clinch at the fence early in the first round.

Souza used a judo throw to take Markos down midway through the first round, delivering blows to the face before Markos gave up her back. Markos fought off a choke, got up and scored with some strikes in the clinch.

The Brazilian took Markos down early in the second round but Markos reversed position, controlling from on top in half-guard for most of the round.

Markos came out swinging in the third round, punishing Souza with strikes at the fence before the Brazilian took her down. Markos worked her way to top position midway through the round.

Markos had lost to Amanda Ribas, Mackenzie Dern, Kanako Murata and Luana Pinheiro since an October 2019 split-decision win over Ashley Yoder. The loss to Pinheiro in May came by first-round disqualification for an illegal upkick.

The 30-year-old Souza, a former Invicta FC champion, is 3-3-0 in the UFC but has lost three of the last four.

This report by The Canadian Press was first published Oct. 23, 2021.