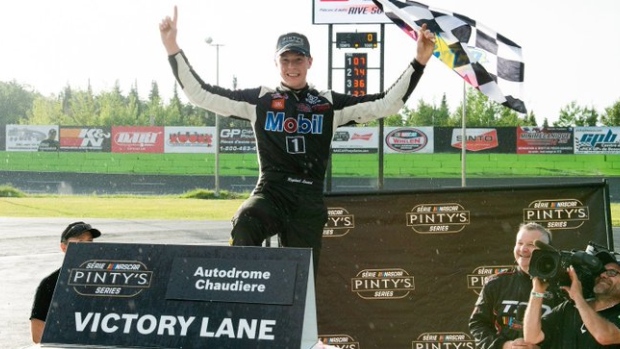 Raphael Lessard's phone has not cooled off since he won his first career NASCAR race Saturday afternoon.

"I've never had that many interviews after a race, that many calls. I feel like my phone is going to blow up." Lessard said in an interview.

The 19-year old St-Joseph-de-Beauce, Que., native captured the Chevrolet Silverado 250 NASCAR Gander RV & Outdoors Trucks Series race at the Talladega Superspeedway in Alabama. Lessard is in his first year as a full-time driver in the series, racing with the Kyle Busch Motorsports team.

Busch, a two-time NASCAR Cup Series champion, congratulated the youngster on his victory via text.

"He's been a huge help. He gave me a chance this year." Lessard said.

The Trucks Series is one of three national circuits run by NASCAR. It sits third on the pecking order behind the Xfinity Series and top-tier Cup Series.

Lessard earned the victory on the final lap of the race, which was called when a crash involving a handful racers led to a caution flag. His car led by a nose on Trevor Bayne as fellow Canadian Stewart Friesen, who led the race, spun out and crashed.

The teenager was unaware he had been declared victor until his crew chief informed him while driving the slow lap after the race.

"I just started screaming and I thanked everyone," Lessard said. "This is a dream come true. This is what I've been dreaming as a kid, becoming a NASCAR series winner. It feels amazing."

Due to COVID-19 restrictions, Lessard couldn't commemorate his win in the victory circle on the track. Instead, after the team returned to its home base in Mooresville, N.C., crew chief Mike Hillman Jr. hosted a celebratory bonfire in his backyard.

"We worked really hard every single day, and I've been working really hard since I started racing for this day to happen." Lessard said.

Lessard started auto racing at age 11. His father, Francois, bought him his first ride: a Honda Civic mini stock car, much to the shock of Raphael's mother, Chantal.

He quickly rose up the ranks as a racer, becoming the youngest driver to participate in the Quebec Sportsman Series in 2013. The next year, he drove in races against his father and decided to commit to racing full-time, dropping his other love of hockey.

Lessard first started racing in the U.S. in 2015 as part of the PASS North Series and was later picked up by NASCAR driver David Gilliland's team. He then won the CARS Super Late Model Tour Championship, becoming the youngest Canadian to win an American stock car championship, and attracting Busch's attention.

"I guess he saw what I could do behind the wheel," Lessard said.

The Quebecer joined Kyle Busch Motorsports ahead of the 2018 Super Late Model season. Lessard then raced in the NASCAR Gander Trucks series for the first time in 2019 where he made five appearances, including two top-10 finishes, before joining full-time in 2020.

Despite not qualifying for the NASCAR circuit's playoffs, Lessard is still focused on finishing his 2020 season strong. He hopes his performances will entice more sponsors to come his way so he can remain in the Trucks series next year.

He sits in 12th place after Saturday's win.

"We always kept on working hard and that's what we're going to do for the rest of the season too. I'm just excited to be a NASCAR Trucks series winner." Lessard said.

Drivers who don't qualify for the playoffs still can compete in playoff races.

Lessard's next scheduled event is the Clean Harbors 200 at Kansas Speedway on Oct. 17.

This report by The Canadian Press was first published Oct. 5, 2020.