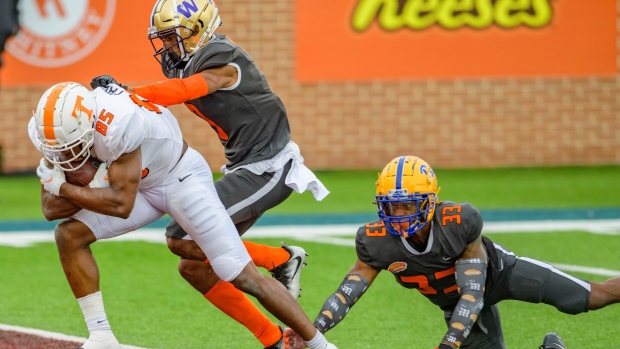 Canadian receiver Josh Palmer is taking a philosophical approach to not having the chance to audition at the 2021 NFL combine.

League coaches and general managers gather annually in Indianapolis to put the top draft-eligible prospects through a series of physical and mental evaluations. But the league eliminated in-person workouts this year due to the COVID-19 pandemic and all interviews and psychological testing will be done virtually with limited in-person medical exams.

"Obviously, I wanted to experience the combine," Palmer said during a video conference this week with Canadian reporters. "But the blessing is my pro day is a lot later so I have a lot more time to train.

"I always try to find the positives and negatives."

The six-foot-one, 210-pound Palmer, a native of Brampton, Ont., recorded 96 catches for 1,459 yards and seven touchdowns during his college career at Tennessee. The Volunteers' pro day is scheduled for March 25 and Palmer has a simple goal for that session.

"Just run really fast," he said. "The 40-yard dash is what I'm putting all of my effort into.

"With the Senior Bowl out of the way, there's not really more from a skill standpoint that I could possibly show. I'm hoping to run anything in the 4.40s."

Palmer capped an impressive week of practice with a 14-yard TD catch in last month's Senior Bowl, helping the National side beat the American 27-24 in Mobile, Ala. Palmer's work ethic and ability certainly caught the eye of NFL.com's Daniel Jeremiah.

"He looked smooth and fluid in one-on-ones," Jeremiah wrote of Palmer following the opening practice. "He was able to get over the top of coverage and tracked the ball well.

"There wasn't a lot of buzz about him coming into the week but I thought he was really consistent."

Jeremiah added he had Palmer graded as a third- to fourth-round selection in the 2021 NFL draft slated for April 29-May 1. Not bad considering Palmer, a four-year starter at Tennessee, had 33 catches for 475 yards and four TDs this season.

Palmer had just one career 100-yard receiving performance in 36 starts with the Vols. But many scouts chalk that up to below-average quarterback play at Tennessee as Palmer had only four drops (none last season) in 164 career college targets.

Palmer had four catches for 57 yards and a TD in Tennessee's 48-17 loss to top-ranked Alabama last year. In the same game, John Metchie III, a sophomore receiver also from Brampton, had seven receptions for 151 yards for the eventual NCAA-champion Tide.

The NFL has been on Palmer's radar since leaving home to transfer to St. Thomas Aquinas, a high school football powerhouse in Fort Lauderdale, Fla.

"I knew what I wanted to achieve in order to play college and professional football," Palmer said. "I needed the exposure so moving to St. Thomas was definitely a business move.

"Just playing down there against a lot of talent at those high schools really helped me develop into the player I am, especially the coaches. Ever since I decided to make the move, that (NFL career) was when I was like, 'OK, this is really happening. I have to buckle up because this is what I am trying to achieve.'"

Canadian football officials have certainly taken notice. Palmer was listed at No. 2 on the CFL Scouting Bureau's list of the top-20 prospects for the '21 draft behind Iowa tackle Alaric Jackson of Windsor, Ont., who also participated in the Senior Bowl along with No. 11 Benjamin St-Just of Montreal, a defensive back at Minnesota.

Predictably, any CFL team selecting Palmer will have to wait for him because playing in the NFL remains his top priority.

"All of my sights are on the NFL," he said. "When I have a goal I do whatever I can to achieve it and flourish in it."

And in Palmer's eyes, that means taking no days off and always being prepared to prove himself.

"All the time," he said. "There's always something that I feel like needs to be improved and worked upon.

"I developed this crazy habit that I'm never satisfied unless I'm working so I try to learn as much every day and just work. That's really all you can do."

Palmer and Metchie anchored what was a strong Canadian NCAA contingent last season. And then there was receiver Chase Claypool of Abbotsford, B.C., who had 62 catches for 873 yards and nine TDs while rushing for two others in a stellar rookie season with the NFL's Pittsburgh Steelers.

"I paid attention to (Claypool's season) really closely, he had a phenomenal year," Palmer said. "It's great to see him flourish in the NFL, it's inspiring.

"It truly is a blessing to be among the group (of Canadians shining in NCAA). The goal is to eventually make it easier for talent to be shown back home."

This report by The Canadian Press was first published Feb. 26, 2021.