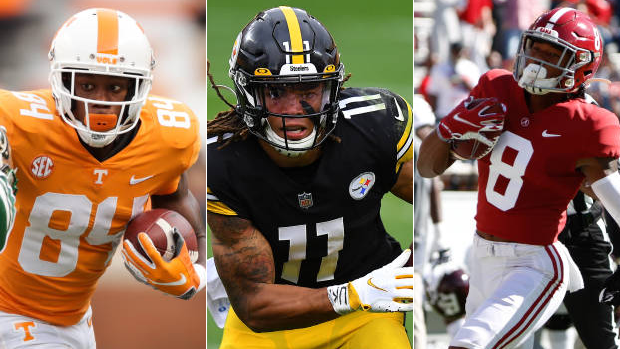 There was a time not that long ago when being a young Canadian receiver aspiring to play big-time NCAA football was a tough mountain to climb.

Jerome Pathon found that out in the early 1990s when he was preparing to leave high school in Vancouver.

“My hopes and dreams were dashed from the get-go when I tried to send my VHS tapes for college opportunities,” said the 44-year-old Pathon, who played eight NFL seasons for the Colts, Saints and Falcons. “The doors couldn’t close fast enough because no one would give me a chance … I didn’t get the response I was looking for.”

Pathon’s path instead took him to Acadia University in Nova Scotia for a season where his play earned him a transfer to the University of Washington. He went on to become an NCAA star and the highest NFL-drafted Canadian receiver ever, the 32nd overall pick to the Indianapolis Colts in 1998 – the team’s second pick after selecting Peyton Manning first overall.

His end-around had worked. But he noticed there weren’t a lot of other Canadians doing what he did in the NFL or the upper levels of the NCAA.

“Transferring to Washington was when my dreams of going to the NFL received a bit of a lifeline,” Pathon said. “But I knew [a Canadian receiver making it to the NFL] was something that didn’t often occur.”

That, however, may be about to change as a talented group of young Canadian receivers has descended upon the highest levels of American football, in what represents an unprecedented wave of domestic talent at the position.

All of them are under age 23, including Pittsburgh Steelers rookie Chase Claypool, the headliner who has built on his successful career at Notre Dame to become an early candidate for the NFL’s top offensive rookie of the year award.

And there is a group right behind Claypool hoping to follow in his footsteps.

It includes Alabama Crimson Tide sophomore John Metchie and Tennessee Volunteers senior Josh Palmer, both Brampton, Ont., products who will face each other this coming Saturday in the SEC matchup.

There’s also Clemson Tigers freshman Ajou Ajou, a product of Brooks, Alta., suiting up for the No. 1 team in NCAA football. He scored his first career touchdown in Saturday’s 73-7 thrashing of the Georgia Tech Yellow Jackets.

There is Virginia Cavaliers senior Terrell Jana and Pittsburgh Panthers sophomore Jared Wayne, two players who’ve had big impacts on their teams in the ACC, which includes Clemson.

“It’s definitely cool seeing all the success happening of all these Canadians,” Jana said. “The respect for Canadian ball hasn’t really been there and we see this opportunity we have in front of us to put ourselves on the map. We’re building that resume for Canadian players and the better we do, then the bigger the opportunities for the players who come after us. It’s almost an opportunity responsibility to garner that respect.”

To understand why Canadian receivers have struggled to gain respect in the U.S. over the years, a quick history lesson: Over the past 55 years, just five receivers who were raised in Canada have been selected in the NFL Draft. (Four others had Canadian citizenship by birth but played all their football growing up in the U.S.)

Among the five, only Claypool, Pathon and former Syracuse receiver Tommy Kane have ever started in an NFL game, with Pathon setting the high-water mark with 260 career catches for 3,350 yards and 15 touchdowns over those eight seasons.

So where has this new wave of receivers come from? And will this trend continue?

“I think a lot of this just has to do with the development of the sport,” said TSN football analyst Duane Forde, who specializes scouting Canadian talent at the collegiate level. “In the past, a lot of great athletes didn’t do the things necessary to develop their talents fully. Now, Canadian players are doing the same things as American players to maximize their talents.”

One of those things has been to compete against top-level competition as teenagers by completing at least part of their high school football and education programs in the United States, a path taken by Metchie, Palmer, Ajou, Wayne and Jana, among others.

It’s a trend that started in high school basketball more than a decade ago and has quickly spread to football. And it may be especially beneficial for receivers who are less likely than offensive or defensive linemen to get collegiate opportunities south of the border based on their measurables.

“It’s always a double-edged sword for us,” said Jim Mullin, president of Football Canada. “It’s great that we can point to these guys as part of our recruiting, but when you take the top five per cent of players out of the pool in high school, that matters.”

Both Metchie and Palmer have exploded this season, stepping into roles on their respective college teams vacated by players who’ve moved onto the National Football League.

Not bad for two guys who started out with the Brampton Bulldogs minor football program, and are now headliners in the SEC.

“In the Bulldog family, everyone is watching,” said longtime coach Gerry Miller. “They deserve all the accolades, but it gives you great satisfaction to see these kids come from our program.”

The most intriguing of the Canadian receivers may be Ajou, an 18-year-old whose parents immigrated to Alberta from the Sudan.

At 6-foot-4 and 220 pounds with great speed and agility, he’s considered to have tremendous upside.

“He’s going to be an unbelievable player,” said Clemson head coach Dabo Swinney this week. “He is unique. I have really not had a guy like Ajou. I mean, he’s 220 pounds, he can run, and you don’t realize how fast he is because he’s so gangly. He’s going to be a guy who will be a big-time factor for us as we go through the rest of this season and certainly the rest of his career.”

It's all very exciting to Pathon, who followed fellow B.C. native Claypool throughout his career at Notre Dame and shakes his head at what’s now occurring.

“Alabama, Clemson … you don’t get any better than those ones,” said Pathon. “All of those players are five-star athletes … the fact we have some guys from Canada in that company is mind-blowing.”​