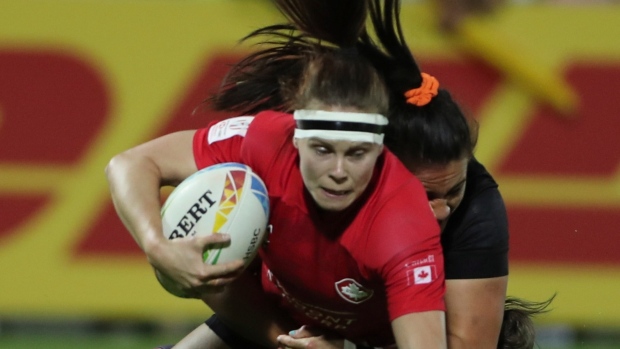 CAPE TOWN, South Africa — Canada's women ran in six tries en route to a 32-0 win over Brazil on the opening day of play Friday at the Cape Town Sevens.

The Canadian women moved up to fourth overall in the standings after losing 17-14 to New Zealand in the Dubai final. France stands fifth, Spain seventh and new core team Brazil 12th.

The Canadian men, paying for a string of errors, were beaten 33-21 by Argentina in their opening match. Theo Sauder scored two late tries to make the score more respectable after Canada gave up three unanswered tries in the second half.

The men, who finished 10th in Dubai in their season opener, are in Pool B with No. 2 New Zealand, No. 7 Argentina and No. 15 Wales in South Africa.

The Cape Town Sevens, one of six combined men's and women's events this year, run through Sunday. It marks the first time the women have taken part in the tournament.

There were several upsets on the men's side Friday with Ireland defeating Australia 26-21, Kenya downing Samoa 24-19 and Scotland edging England 26-24.