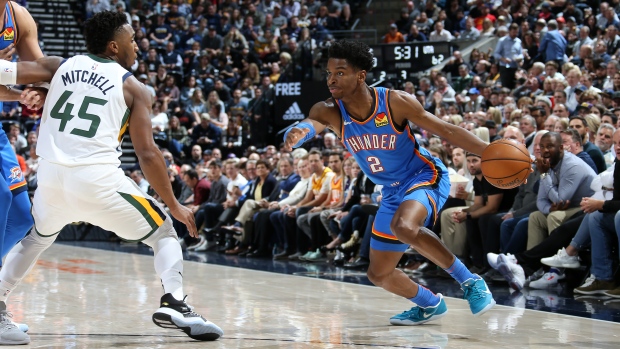 SALT LAKE CITY — Soon as Donovan Mitchell started imposing his will on both ends of the court in the fourth quarter, there was nothing anybody could do to stop him.

Mitchell's all-around performance Wednesday night led the Utah Jazz to a 100-95 victory over the Oklahoma City Thunder in the season opener for both teams.

On one end, the Jazz guard was crashing the boards and securing the ball. At the other end, he repeatedly slashed to the rim for one big basket after another.

Mitchell finished with 32 points and 12 rebounds, becoming the first Utah player with at least 30 points and 10 boards in a season opener since Carlos Boozer did it to open the 2007-08 season.

"I just wanted to attack," Mitchell said. "When you have teammates that trust you, coaches that trust you with the ball, it really makes it easy to keep going and make the right plays."

His biggest impact came in the fourth period, when Mitchell had 14 points and seven rebounds. He made several key buckets down the stretch to help the Jazz rally and snap a seven-game regular-season losing streak to the Thunder.

Oklahoma City built an eight-point lead early in the fourth before Utah surged ahead 85-80 on a 9-0 run capped by Bojan Bogdanovic's 3-pointer.

Chris Paul capped a 6-0 spurt with a long jumper of his own to put the Thunder ahead 86-85. Mitchell answered by slashing into the lane for back-to-back layups to put the Jazz ahead for good.

A mid-range jumper from Mitchell gave Utah a 96-91 lead with 21 seconds remaining.

Jazz coach Quin Snyder pointed to Mitchell's effort on help-side defence and his rotations as being an equally important difference-maker during that stretch run.

"He's much improved right now defensively because he's demanding it of himself and he's competing," Snyder said.

Bogdanovic added 16 points and Royce O'Neale chipped in with 14 for the Jazz. Rudy Gobert grabbed 14 rebounds.

The Jazz outscored the Thunder 58-34 in the paint to offset 6-of-24 shooting from 3-point range.

"We missed a lot of stuff at the rim tonight and generally we've been fairly good there and getting stuff downhill at the basket," Oklahoma City coach Billy Donovan said.

Oklahoma City missed nine of its first 11 shots and hit just 23.8% (5 of 21) overall from the floor in the first quarter. Those shooting struggles opened the door for Utah to sprint out to a 23-10 lead. Starting with a jumper from Joe Ingles, the Jazz scored baskets on four straight possessions to carve out a double-digit advantage.

The Thunder made a pair of 8-0 runs to tie the game at 28 in the second period. They finally took their first lead after Gilgeous-Alexander made three straight baskets to fuel a 9-2 spurt. Paul capped it with a pair of free throws, giving Oklahoma City a 46-42 lead.

Utah answered with a 7-0 run — punctuated by a thunderous dunk from Mitchell — to go ahead 49-46 at halftime.

"We learned we've got a lot of grit and fight with us, but there is no moral victories," Paul said. "We felt like we let one slip away, but I do feel good about how we played."

Mike Conley went 1 of 16 from the field in his Utah debut after spending his first 12 seasons with Memphis. He missed his first 12 shots before finally scoring on a floater in the lane with 5.9 seconds left in the third quarter.

Conley finished with five points after adding a pair of free throws with 2.1 seconds left. He made a big impact on the defensive end late, helping limit Paul and Gilgeous-Alexander to eight combined fourth-quarter points.

"I didn't want to just be out there missing shots," Conley said. "I wanted to be out there helping the team as best as I can and I just tried to be that for the team tonight."

Emmanuel Mudiay shrugged off a tough preseason that included a hamstring injury by scoring 12 points and dishing out five assists in his Jazz debut. Mudiay hit a pair of critical layups midway through the fourth quarter to help Utah rally.

"He's been doing the work," Snyder said. "Our whole staff is dug in on him."

Thunder: Oklahoma City went 6 of 12 from 3-point range in the second quarter. ... Darius Bazley finished with zero points and three rebounds in his NBA debut. ... Steven Adams pulled down 11 rebounds but finished with just three points after shooting 1 of 8 from the field and 1 for 6 from the line.

Jazz: Bogdanovic went to the locker room midway through the second quarter after injuring his ankle. He returned in the third. ... Utah finished with an 18-7 edge in fast-break points.

Jazz: At the Los Angeles Lakers on Friday.