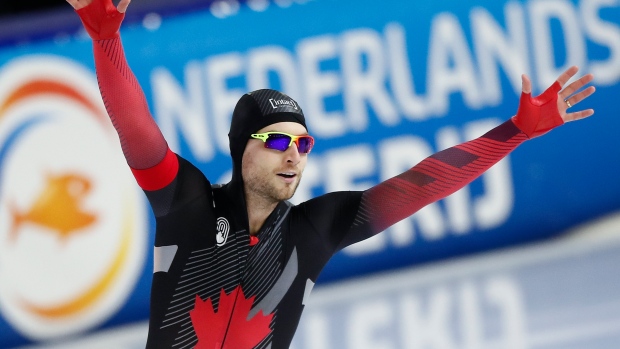 “My race was just as I had imagined it," Dubrueil said.

"It was really important for me to have a good start and I did just that. My first 300 metres was pretty good. In the last corner, I lost my balance a little bit, but at that speed it's completely normal.

"The last 200 metres wasn't my finest and it's a part I would like to re-do, but overall, it was really good race, Maybe the best race of my career."

"Canadian speed skating has such an incredible history and I have had the chance to rub shoulders with a some of the legends of our sport," Dubreuil said.

"I am far from being considered a legend, but if my performance can inspire just a few people it will be a tremendous honour for me.”

The long-track team's season has been limited to two World Cups in January and this week's world championship in Holland because of the COVID-19 pandemic.

They've been without ice at their national training base, Calgary's Olympic Oval, since September because of a mechanical failure.

Ice will not be restored there until spring. The athletes followed a makeshift schedule of dryland training, skating outdoors, short-track workouts and two weeks at a B.C. indoor oval in November.

Winning a combined 11 medals in the two World Cups restored their confidence for the world championship.

The Canadians had beaten the Dutch women twice to win gold in both World Cups.

"I think that we should be proud of what we’ve done with the cards we were dealt leading into this season," Blondin said.

"If you were to tell me before we got here that we would have silver and be within two tenths of the Dutch girls, I would have laughed and not believed it."

“It was obvious right from the start that this team was working well together," said Bloemen.

"After winning bronze at the first World Cup, we just kept our strategy the same and built on it. We won silver at the next World Cup and improved to only 0.2 seconds from gold at world championships.

"It’s looking very promising going into the Olympic season where we’ll be able to prepare much better in relation to our opponents.”

The world championship continues Saturday with Dubreuil racing the 1,000 metres, and Blondin and Belchos competing in the mass start.

This report by The Canadian Press was first published Feb. 12, 2021.