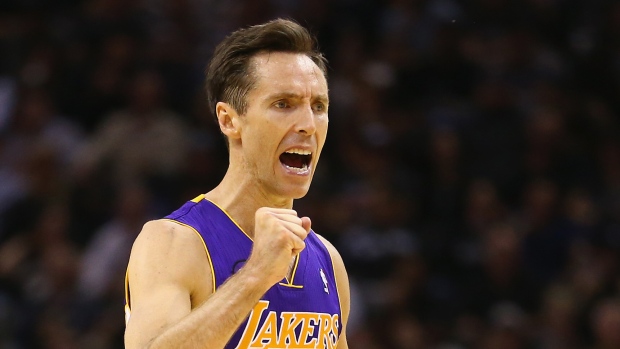 Los Angeles Lakers point guard Steve Nash announced his retirement from basketball on Saturday with an open letter to fans on the Player's Tribune.

The Victoria, B.C. native was an eight-time NBA All-Star and two time MVP.

Nash, 41, was ruled out for this NBA season in October with severe nerve damage in his back, which confined him to just played just 45 games over the past two seasons.

Nash spent 10 of his 18 seasons with the Phoenix Suns and addressed his time with the team in his retirement announcement.

"It will always hurt that Phoenix Suns fans didn’t get the championship they deserved during our run," Nash wrote. "Yes, we had some bad luck but I always look back at it and think, I could’ve made one more shot, or not forced a turnover, or made a better pass. But I don’t regret anything. The arena was always sold out and rocking. It was the time of my life. Thanks, Phoenix."

Nash was drafted by the Suns in the first round of the 1996 NBA Draft. He was traded from the Suns to the Dallas Mavericks prior to 1998-1999 season but returned to Suns in free agency in 2004.

The joined the Lakers in free agency of 2012, but noted in his retirement letter his career in Los Angeles did not go as planned.

"When I signed with the Lakers," Nash recalled, "I had big dreams of lifting the fans up and lighting this city on fire. I turned down more lucrative offers to come to L.A. because I wanted to be in the 'fire,' and play for high risk and high reward in my last NBA chapter. In my second game here, I broke my leg and nothing was the same."

However, the three-time All-NBA point guard added he will also take a strong memory from his final team.

"Last spring, when I returned to the court, I was given a standing ovation at Staples Center. It was a dark time in my career and that gesture will be one of my best memories," Nash wrote as he thanked Laker fans.

He sits third all-time in NBA assists with 10,335 and first all-time in career free throw percent with .904.

"I will likely never play basketball again. It’s bittersweet," Nash admitted in his letter. "I already miss the game deeply, but I’m also really excited to learn to do something else. This letter is for anyone who’s taken note of my career.

"At the heart of this letter, I’m speaking to kids everywhere who have no idea what the future holds or how to take charge of their place in it. When I think of my career, I can’t help but think of the kid with his ball, falling in love. That’s still what I identify with and did so throughout my entire story."

STEVE NASH RETIRES - TOP THINGS TO KNOW (courtesy ESPN)
1.    Steve Nash ranks 3rd on the NBA all-time assist leaderboard with 10,335 (behind John Stockton and Jason Kidd).
2.    Nash set an NBA record with four seasons shooting 50% from the floor, 40% from beyond the arc and 90% from the foul line.
3.    Nash won back-to-back MVP awards in 2004-06 with the Suns, only LeBron James has achieved that feat since (twice). Nash is one 10 players to win consecutive MVP awards and the only player in NBA history under 6-foot-6 inches tall to win multiple MVPs.

Father time
* One would have to go all the way back to Nash's first or second season in the league to find averages this low in his career. Nash's rookie season was 1996-97.

Multiple MVPs, but no titles