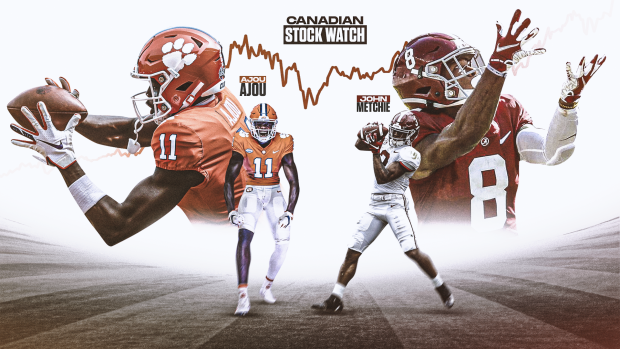 In this week's Canadian Stock Watch, John Metchie and No. 1 Alabama return to action following a two-week break, while Ajou Ajou and No. 4 Clemson welcome back quarterback Trevor Lawrence from a two-game absence.

Kentucky (3-4) vs. No. 1 Alabama (6-0), 4pm et/1pm pt on TSN1/3: We knew this would be a college football season like no other thanks to the ongoing coronavirus (COVID-19) pandemic, but its realities have frustrated a number of programs across the country. When the Crimson Tide hosts the Wildcats at Bryant-Denny Stadium, it will be their first action in three weeks, following a bye and the cancellation of their game against LSU after a COVID outbreak on the Tigers. Nick Saban's team heads into the home stretch with a clear path into the SEC title game and the College Football Playoff, but can't afford to let up against a wildly inconsistent Kentucky team. Mark Stoops' team is coming off of a 38-35 victory over woeful Vanderbilt, its first win in three games. The issue for Kentucky is its oscillating offence. Prior to the win over the Commodores, the Wildcats managed a combined 13 points in losses to Georgia and Mizzou. Starting senior QB Terry Wilson's season-high passing output was 239 yards in the Wildcats' season-opening loss to Auburn. Kentucky's offensive struggles are likely to continue against Dylan Moses and a stingy Tide defence that has only allowed 41 combined points over its last three outings.

Canadian to Watch: WR John Metchie (Brampton, Ont.) - This will be Metchie's second outing since the season-ending injury to fellow wideout Jaylen Waddle and an opportunity to assert himself in a way that he didn't against Mississippi State. While the Tide won that game handily, 41-0, Metchie finished the game with only 18 yards on three receptions. Mac Jones's favourite target on the day was DeVonta Smith, who had an afternoon of four touchdowns and 203 yards receiving.

No. 4 Clemson (6-1) vs. Florida State (1-6), Noon et/9am pt on ABC: Heisman candidate and likely No.1 overall pick in the 2021 NFL Draft Trevor Lawrence returns to action for the Tigers after two games on the sidelines due to a bout with COVID-19. Lawrence returns to a Clemson team that is no longer the top-ranked school in the nation after having fallen to Notre Dame in a double-OT thriller two weeks ago, the Tigers' first regular-season loss since 2017. But the Tigers' path to a sixth straight trip to the College Football Playoff remains straightforward. After the game against the moribund 'Noles, Dabo Swinney's team finishes up its regular-season schedule with very winnable games against Pitt and Virginia Tech. Win those and you likely set up a rematch with the Irish in the ACC title game and a victory there will undoubtedly put the Tigers into the CFP. An FSU team that has given up an average of 38.3 points a game should provide Lawrence the opportunity to shake off whatever rust he might have gathered on the sidelines. It would be remiss not point out the job that D.J. Uiagalelei did with Lawrence out. Even with the Irish loss, Uiagalelei threw for 781 yards on 59-for-89 passing and five TDs in his two games, proving that the Clemson quarterback job will be in steady hands once Lawrence heads to the pros.

Canadian to Watch: WR Ajou Ajou (Brooks, Alta.) - The freshman from Alberta hasn't seen a pass since the Tigers' rout of Georgia Tech in mid-October and will hope that the return of Lawrence will lead to more targets his way going forward, competing among a deep receiving corps including Amari Rodgers and Cornell Powell, along with a pass-catching back in Travis Etienne.

No. 7 Cincinnati (7-0) vs. UCF (5-2), 3:30pm et/12:30pm pt on TSN2 - As Luke Fickell's Bearcats continue along their undefeated campaign, not only will UCF provide a stiff test to that perfect record, but maybe also a glimpse into their future. Famously in 2017 under Scott Frost, the Knights capped off an undefeated season with Peach Bowl victory over Auburn. Finishing 13-0, UCF claimed themselves National Champions, a title actually held by Alabama for winning the CFP. Like UCF did in 2017, the Bearcats will face an uphill battle getting CFP consideration even if they finish their season without a blemish. Very simply, the CFP is geared to reward Power 5 teams and a Cincinnati undefeated season and AAC title is unlikely to be enough to pip a one-loss Power 5 team (let's say Notre Dame should they lose to Clemson in the ACC title game) to a playoff place. Still, the Bearcats need to do what they can to force themselves into that conversation. After the Knights, Cincinnati has Temple and a good Tulsa team (that has beaten UCF) to finish off their schedule. Getting there without a loss will be difficult, but it's doable.

Canadian to Watch: TE Bruno Labelle (Montreal) - Senior Labelle, who has seven receptions for 47 yards and a TD on the year, is a question mark for Saturday's game with a knee issue. In his midweek media briefing, Fickell said that Labelle, along with DT Elijah Ponder and safety Bryan Cook could play. "All of those guys have chances to play just because of their mentality," Fickell said. "We’re hoping they maybe have a chance."

Other Canadians to watch: Senior offensive lineman Alaric Jackson (Windsor, Ont.), the No. 1 player on the CFL Scouting Bureau's fall prospect list, can help Iowa hand Penn State its first 0-5 start in its 134-year history with a win on Saturday. Running back Chuba Hubbard (Sherwood Park, Alta.) picked up an injury after only six carries and 31 yards last time out against Kansas State with redshirt sophomore LD Brown performing admirably in his stead. Hubbard has had the week to recuperate ahead of Saturday's hotly anticipated Bedlam Series matchup with Oklahoma in Norman. 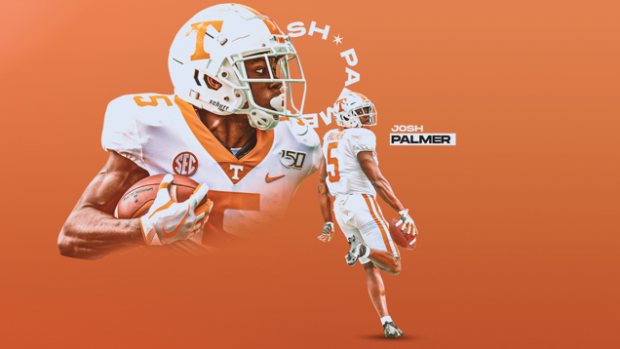 - No. 6 Florida (5-1) vs. Vanderbilt (0-6), Noon et/9am pt on TSN2 - With a win over Georgia, the Gators are on track to a spot in the SEC title game and a matchup with a truly heinous Commodores team looks like an opportunity for quarterback Kyle Trask to pad his Heisman resume. Through six games, the senior QB and likely first-round pick in next spring's NFL Draft has thrown for 2,171 yards on 148-for-211 passing with 28 touchdowns and only three picks. Trask will like his chances against a Vandy team that has surrendered just under 36 points a game thus far in 2020.

- Tennessee (2-4) vs. No. 23 Auburn (4-2), 7pm et/4pm pt on TSN2 - Wide receiver Josh Palmer (Brampton, Ont.) and the Vols head into a difficult final stretch of their season that also sees upcoming games against No. 5 Texas A&M and No. 6 Florida with a date against Gus Malzahn's Tigers. Palmer, a senior, continues to lead Tennessee in receiving with 323 yards on 21 receptions and four TDs. Auburn's defence will provide a stiff test for the Vols. The Tigers have given up no more than 30 in their six games this season and have averaged 17.5 points surrendered in their four victories.

- No. 20 USC (2-0) vs. Utah (0-0), 10:30pm et/7:30pm pt on TSN2 - It's Pac-12 After Dark action as the Utes open up their season with a visit from a Trojans team with a sweep of the state Arizona in close wins over both the Wildcats and Sun Devils. Through two games, quarterback Kedon Slovis already has over 700 yards passing as talk grows surrounding the sophomore as a potential top-10 pick in the 2021 NFL Draft. Still, the Scottsdale, AZ knows he has more work to do to refine his game. "I think, at times, my mechanics get sloppy," Slovis said after last week's 34-30 win over Arizona. "I don't know if, like coach is saying, dryness or maybe it's the ball is — I don't know what it is, but I'll get it fixed next week. We have a lot of time to get it fixed and, yeah, my arm feels great. So I just need to get it fixed, mechanically."