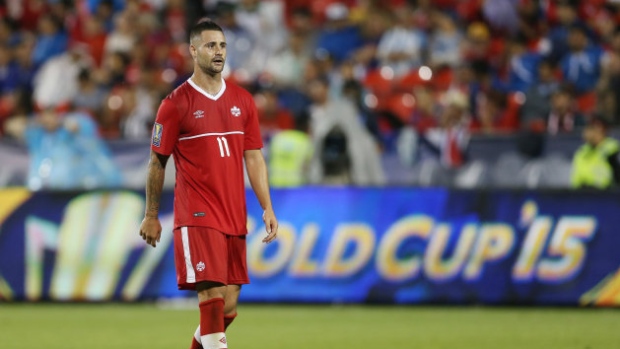 After nine years in the United Kingdom, Marcus Haber decided it was time to return to the West Coast.

Pacific FC and the Canadian Premier League were only too happy to welcome the striker from Vancouver aboard.

Haber comes to the Victoria club from Scotland's Falkirk, where he'd been on loan from Dundee FC. Dundee announced last week that Haber had left the club by mutual consent.

"But my heart and soul's always in Canada. I feel like I've still got a lot left in my body, a lot left in my career. When the opportunity presented itself, it just felt right. It was an easy decision."

"We were looking for an experienced striker who will score goals and bring a competitive edge to our team," Pacific FC coach Michael Silberbauer said in a statement. "Marcus' size, abilities and willingness to join the team at the prime of his career made him an easy choice for us."

Haber, who began his career with the pre-MLS Vancouver Whitecaps and Dutch side Groningen, has high hopes for the CPL.

He sees the new league as a chance to give back.

"I've had a lot of experience, I've been fortunate enough to have a fairly long career abroad," he said. "I think it's important at any club to have a mix of youth and experience.

"I remember when I was 20 years old at the Vancouver Whitecaps, I was just a young kid who was naive and wasn't really familiar with the professional game. I had players around me that helped me dramatically and helped me improve as a player and helped me go on to bigger and better things.

"Now with the roles reversed, I feel like it's my responsibility to look after the younger players and lend them a helping hand in any way I can on the pitch or off the pitch."

The seven-team CPL is set to kick off in April.