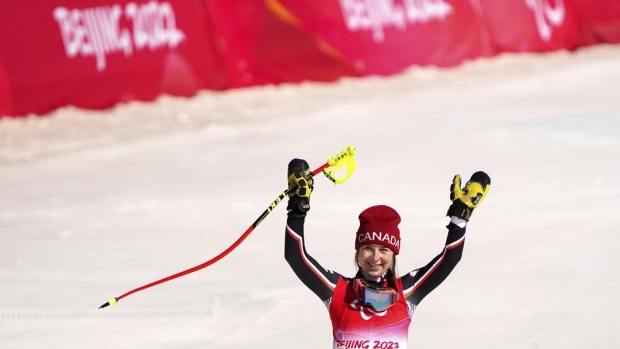 The International Paralympic Committee trumpeted a record number of women competing in Beijing, but 138 still represents just 24 per cent of 564 international athletes.

By comparison, 45 per cent of athletes competing in Beijing's Winter Olympics were women.

Canada's Paralympic team of 48, including guides, features 13 women for 27 per cent.

There were originally 14 women on the team, but a skier withdrew from women's alpine racing because of injury.

Over half of Canada's 128 athletes in Tokyo were women with 71 accounting for 55 per cent of the team.

That's due in part to Canada qualifying in three women's team sports.

The elephant in the Winter Paralympic Games room is Para hockey, which was previously referred to as sledge hockey. It's the only large-team sport and it's male.

"There's no question that the team sport and the team sport skewing is kind of a number one kind of challenge," Canadian Paralympic Committee president Karen O'Neill told The Canadian Press from Beijing.

The IPC slapped a "mixed" label on Para hockey before the 2010 Winter Games in Vancouver and Whistler, B.C.

But only three women — two Norwegians and one Chinese — have ever been on a Paralympic Games roster.

The host country's Jing Yu is the lone woman on a Para hockey team in Beijing. Rosters are 17 players, but countries can bring an 18th if that player is a woman.

Canada is one of few countries alongside the United States and Britain with established national women's Para hockey teams.

Women wanting to play Para hockey at its highest level — the Paralympic Games is their Stanley Cup — currently have to make a male roster.

"That's what's being told to girls and women around the world is 'OK, let's see you crack those top rosters and get there because that's your only option,'" said Tara Chisholm, who coaches the Canadian women's para hockey team.

"I know our women who are watching the Paralympic Games this week are wishing they had the same opportunities that those men that they play with back home on their club teams are having this week."

While a women's world Para hockey challenge is scheduled for this summer, more participating countries are needed for a legitimate world championship and thus entry into the Paralympic Games.

Chisholm doesn't expect the latter to happen in time for the 2026 Winter Games in Milan and Cortina, Italy, with 2030 the better bet.

Andrea Bundon, an associate professor at the University of British Columbia, studies the Paralympic Games gender gap because of her experience guiding visually-impaired Para-Nordic skiers Courtney Knight (2010) in Whistler and Margarita Gorbounova (2014) in Sochi, Russia.

"I believe I was one of two female guides in Sochi. We're lining up at the start line, and despite this being a women's event, there's a lot of men on the start line.

"That got us looking around more generally at who is at the Games? Why are we seeing so few women as athletes, as coaches, managers, wax technicians. Where are the women?"

There are 39 medal events for men, 35 for women and four mixed events in Beijing's Paralympic Games.

"They create balance in the number of medals available to men and women, but they don't create any more spots on the team," she explained. "You're using athletes that are already there. You have the same female athlete with one more race.

"It doesn't create incentive for the nations to develop more pathways for women or to support more women."

Domestically, the CPC runs a recruitment combine called Paralympian Search, similar to the Canadian Olympic Committee's Training Ground, in which athletes from across the country are put through power, speed and endurance tests to match them with a sport.

"We realized many women and young girls were just not coming out," O'Neill said.

A women's pilot project in 2021, which was virtual because of the COVID-19 pandemic, drew over 30 applications, she said.

"Because of the experience from that, and the numbers, we knew that we need to pursue this," O'Neill said.

The IPC committed almost two decades ago to a goal of 30 per cent women in leadership positions.

"They're still not even close to that," Bundon said.

O'Neill says there is more gender parity in technical roles such as coaching on the summer side than winter, but more work has to be done on that front overall.

"When we look at the data and we look at some of the barriers, cultural and societal came up within the top three still," she said.

O'Neill believes a successful Vancouver bid for the 2030 Winter Games would give Canada a role in accelerating women in the Winter Paralympic movement, particularly if women's Para hockey is on the menu.

"I think something as focused as the 2030 bid to bring and shine a light on women in Paralympic sport, hosted by Canada, would be an incredible incentive to further close that gap, and use the runway of the next eight years to invest in the technical, the participation in some targeted areas, that I think would raise the bar and set a new standard," she said.