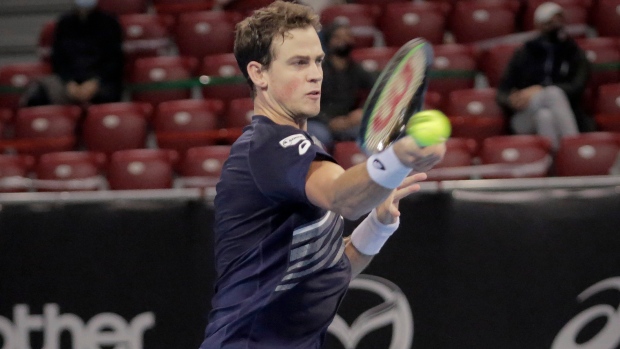 The 30-year-old Pospisil lost 6-4, 3-6, 7-6, to 19-year-old Italian Jannik Sinner in the final of the Sofia Open indoor hardcourt tournament on Saturday.

Pospisil, ranked 74th in the world, had an 0-2 record in finals before Saturday's result at the ATP Tour 250 event.

He also advanced to the final of an indoor hardcourt tournament in Montpelier, France, in February.

"It was a great week, tough, tough one today, would have loved to have won obviously, but don't regret too much," Pospisil said. "Jannik was playing really well, I definitely had my chances, but it was a great week . . . I could have been out in the first round, so was fortunate to get through that one, and get myself a chance to win the tournament, which is all I can ask for."

It was the sixth loss in as many final appearances for Canadians on the ATP Tour this season.

Sinner, the world No. 44, has had a breakthrough year, becoming the youngest player to reach the French Open quarterfinals since 2011.

Sinner dictated rallies to earn an early break and won the first set on an ace. He started the second set with another break but lapsed into errors and Pospisil evened the set score. The deciding set was tight, and Sinner was decisive on serve returns for two mini breaks in the tiebreaker.

"I was trying to win every point and I was present and gave myself a good chance, and he's an incredible player, so there's no doubt you have to play some great tennis to beat Jannik," Pospisil said.

The Italian becomes the youngest player to win an ATP Tour title in 12 years.

This report by The Canadian Press was first published Nov. 14, 2020