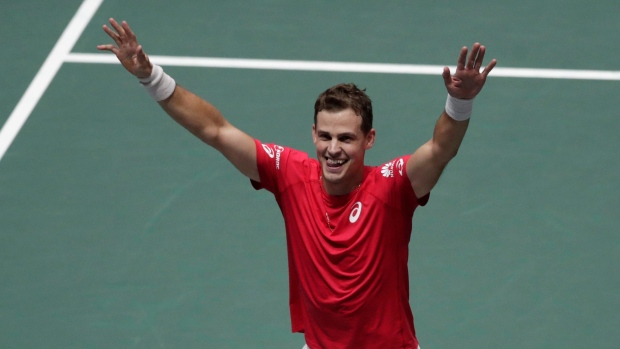 MARSEILLE, France — Vancouver's Vasek Pospisil has advanced to the quarterfinals of the Open 13 Provence tennis tournament after beating his seventh top-60 opponent this year.

Pospisil, ranked 98th in the world, defeated No. 29 Hubert Hurkacz of Poland 6-3, 6-4 in the second round of the ATP Tour 250 indoor hardcourt event on Wednesday.

The 29-year-old Canadian had nine aces and saved all four break points he faced. He won 80 per cent of points when he got his first serve in, as compared to 68 per cent for the eighth-seeded Hurkacz.

Pospisil has enjoyed a strong February. He made it to the final of the Open Sud de France in Montpellier before upsetting world No. 5 Daniil Medvedev last week in Rotterdam, Netherlands.

Pospisil will face the winner of a match between No. 2 seed Stefanos Tsitsipas of Greece and Mikael Ymer of Sweden in the quarterfinals.

Auger-Aliassime bumped his ranking to No. 18 after reaching the final last week in Rotterdam.

The Canadian eked out a win against Travaglia, saving nine of 10 break points he faced. Travaglia could save only one of three.

Auger-Aliassime blew a 5-2 lead in the first set, but then rallied from a 6-4 deficit in the second-set triumph to prevail.

Fourth-seeded Denis Shapovalov of Richmond Hill, Ont., received a bye to the second round and will face Marin Cilic of Croatia.