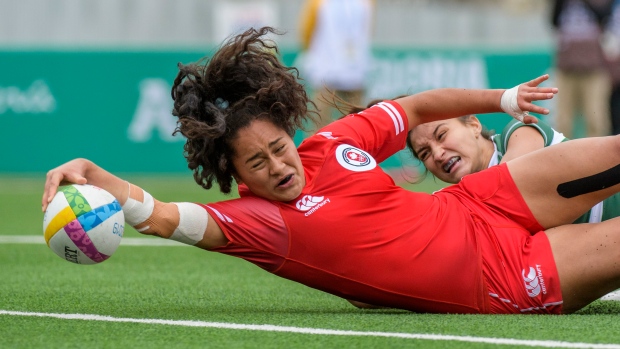 LIMA, Peru — Both Canadian rugby sevens teams hammed it up and took pictures together on the pitch in celebration of their podium appearances Sunday at the Lima Pan Am Games.

The reality of the results became evident as soon as players started walking back to the sidelines.

The Canadian women remained jubilant, displaying their gold medals to the spectators still in attendance after an impressive 24-10 win over the United States. While proud of their silver, the men's players were clearly dejected after a 33-10 loss to Argentina.

Canada has owned the podium in rugby sevens since it has been a Pan Am sport. The men won gold in 2011 at Guadalajara and 2015 in Toronto.

Women's rugby sevens was added to the program four years ago and Canada beat the United States in that final before doing it again here.

"It's unreal, I can't believe this has happened," said winger Asia Hogan-Rochester, who scored three tries for Canada. "This was our biggest opponent so we were a bit (nervous). But we definitely used those nerves coming into this final and we came out on top thankfully."

Breanne Nicholas scored the other try for the powerful Canadian side, which had outscored the competition 175-0 entering the final.

"Each game is a building block and we just kept stepping it up and stepping it up," said assistant coach Morgan Williams. "And they saved the best for last."

Kayla Canett-Oca and Ilona Maher had the American tries.

The men's final started about 15 minutes after the women's game and Canada looked strong at the outset.

German Schulz rumbled in late in the half to give Argentina a 21-5 lead into the break.

Argentina continued its crisp passing and quality tackling in the second half and refused to let Canada mount much of an attack.

With Nathan Hirayama off due to a yellow card, Argentina put it away as Gonzalez Rizzoni scored a third try. Lautaro Bazan Velez added some insurance for the victors and Sean Duke had a try for Canada as time expired.

"Obviously it sucks and we're all hurting to lose that like we did," Hirayama said.

The Canadian women also had a powerhouse roster four years ago, clobbering the Americans 55-7 at BMO Field.

This time around, shantytown dwellings packed along the surrounding hills in a southeast Lima favela provided a colourful and unusual backdrop on a grey, overcast afternoon.

The Canadian lineup offered a mix of youth and experience with several big guns not named to the roster. They used their speed and creativity to handcuff the more physical American side.

Hogan-Rochester found space down the sideline for her first try and with Ariana Ramsey off due to a yellow card, the Canadian speedster — who has a track and field background — repeated the effort to push the scoreline to 12-5 at the half.

Her third try followed early in the second half and Nicholas, who had two conversions, helped put the game out of reach. Maher scored late for the United States.

"There was a lot of new girls, first time putting on a Canadian jersey and we all did it together," Hogan-Rochester said.

The Canadian men also had many new faces and were in good form entering the final, boasting a 104-17 overall scoring edge despite a 12-7 preliminary-round loss to Argentina.

Despite the strong start, Canada looked lost at times against a game opponent that was looking to avenge losses in both previous Pan Am finals.

Argentina's steady pressure and aggressive line speed proved to be too much.

"They just brought it," Hirayama said. "They brought the pressure on us defensively and we just couldn't find a way to break them.

"They were smothering and just quicker to the punch. That's what it felt like."

Both Canadian teams have already qualified for the Tokyo Olympics next year. The men won the Rugby Americas North Sevens title to book their ticket while the women locked up a spot with a top-four finish in the World Series.

The Canadian women crushed Colombia 41-0 in the morning semifinal while the Canadian men dispatched Brazil 35-5.