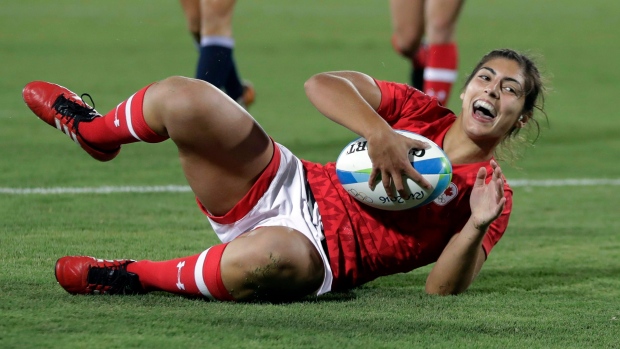 DUBAI, United Arab Emirates — Gayle Broughton scored with less than 30 seconds remaining to lift New Zealand to a hard-fought 17-14 win over Canada in the women's final at the Dubai Sevens on Saturday.

It marked the second straight year the Black Ferns had beaten the Canadians for the rugby sevens title. New Zealand, which has never lost to Canada in a Cup final, won 26-14 the year before.

New Zealand held off a Canadian attack late in the game and then drove the length of the field. The Canadians looked to have escaped when Julia Greenshields turned the ball over but Canada was penalized at the ensuing breakdown and New Zealand took advantage with one last attack.

The Canadian women led 14-5 at the half on converted tries by Karen Paquin and Greenshields after New Zealand opened the scoring via Stacey Waaka.

Paquin found a hole in the Black Ferns defence after a bulldozing run by Pam Buisa. Greenshields dragged a tackler with her as she touched the ball down late in the half after New Zealand was penalized several times deep in its own end.

Charity Williams made a try-saving tackle for Canada as the half wound down, her face bloodied in the process.

But Waaka's second try of the game — and ninth of the tournament — started the New Zealand comeback under the lights at the Sevens Stadium. Waaka stepped around Paquin and accelerated towards the goal-line to cut the Canadian lead to 14-12.

"It wasn't the result that we wanted but it was a great game and a great final for us," said Canada captain Ghislaine Landry.

"We knew we had to show up on Day 3 and be ready to perform. When we're doing that we know we're one of the best teams in the world."

Landry and teammate Britt Benn were both named to the tournament Dream Team.

Canada advanced to the final by beating France 19-7 in the Cup quarterfinal and Australia 26-12 in the semifinal.

Canada, which finishing a disappointing sixth in Gendale, moved into fourth spot with 28 points in the overall standings. New Zealand and the U.S. both have 36 with Australia at 32.

Canada was third overall on the women's World Series last season, behind New Zealand and the U.S.

The Canadian men finished 10th after losing 40-17 to defending Series champion Fiji in the ninth-place playoff.

Canada, helped by two Fijian yellow cards, kept it close in the first half and trailed by just two points at 19-17 with three minutes remaining. The Pacific Islanders reeled off three late converted tries, however, to increase the margin of victory.

Fiji had finished third in its pool Friday, failing to make the Dubai Cup quarterfinals for the first time ever. The Fijians, who won five of the 10 events last season, lost to 24-21 to Argentina on a late try by Marcos Moroni and failed to score enough points in a 24-14 win over France to catch the second-place Pumas with France, Argentina and Fiji all finishing group play on seven points.

Henry Paul took over for the final two tournaments with the men tying for seventh in London, matching their best finish of the season, and placing ninth in Paris. Paul has since taken over the team full-time, leading it to Olympic qualification and a silver medal at the Pan American Games.

Dubai is the first of six joint men's and women's events this season, which features an expanded eight-stop women's circuit. The men's tour remains at 10 tournaments.