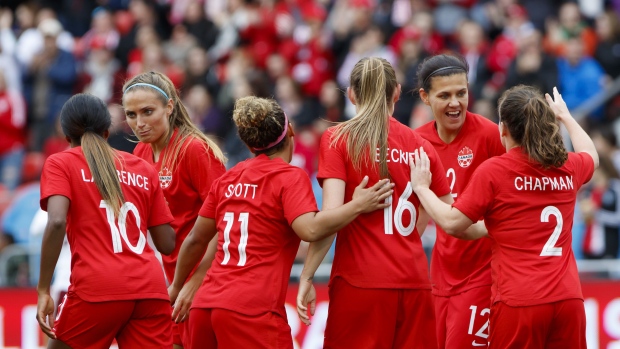 MIAMI — Canada will be in a group with fellow 2019 World Cup participant Jamaica, Mexico and St. Kitts and Nevis at the CONCACAF Women's Olympic Qualifying Tournament.

The schedule and draw were unveiled Thursday.

Canada, ranked seventh in the world, will be the favourite in Group B. Mexico is No. 27, Jamaica is 51st after making its World Cup debut this year, and St. Kitts and Nevis is 134th.

Canada will play its group-stage games in Edinburg, Texas, just north of the Mexican border. Canada opens against St. Kitts and Nevis on Jan. 29, faces Jamaica on Feb. 1 and meets Mexico on Feb. 4.

The host Americans are the tournament favourites after winning the World Cup this year.

The top two teams from each group advance for crossover semifinals on Feb. 7 in Carson, Calif., just south of Los Angeles. The winners of the semifinals secure Olympic spots and also play in the CONCACAF final on Feb. 9.

"It is crucial as a program that we qualify and deliver a massive performance at the Women's Olympic Football Tournament in Japan next year," Canada coach Kenneth Heiner-Moller said in a statement.

"The CONCACAF Women's Olympic Qualifying Tournament is a big event. There are no easy matches and we need to be ready."

Canada has won bronze at the past two Olympics and qualified for the past three Summer Games.

At its last major international tournament, Canada lost to Sweden in the round of 16 at the World Cup in France in June.

Canada is coming off a 4-0 loss to Brazil at an invitational tournament in China on Thursday.