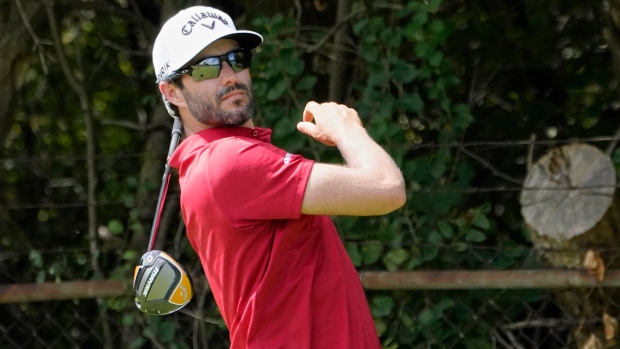 No one ever said golf was easy. Certainly no one at this week’s U.S. Open where Winged Foot is laying a beating on most of the field.

That includes the two Canadians who remain after the cut. Both Adam Hadwin and Taylor Pendrith battled through the unrelenting layout and walked off feeling somewhat whipped.

“I felt lost out there,” admitted Hadwin, who recorded a four-over 74. “I hit some good shots but I’m not hitting it solid.”

Hadwin struggled at the start over the tough opening holes at Winged Foot, making bogeys on the second, third, and fourth holes. He came back with birdies on the six and nine, making the turn at 2-over.

There were two more bogeys on the back nine, including one on 17 that came from a slick up and down. He made another strong up and down to save par on 18. The positive ending did nothing to lighten Hadwin’s mood.

“I don’t think a bogey would have changed my mood,” he said in reference to his 18th-hole par. “I still kind of feel pretty terrible about the state of my golf game right now. I feel good mentally I feel like I’ve done a good job of sticking to the process, trying to pick targets, trying to hit shots but beyond that it’s been a bit of a struggle this week.”

After his round he was trying to decide whether to head to the range and work on his swing or head back to his hotel for some rest and relaxation, which he thought might be just as helpful in the search for an answer.

Pendrith counted one shot more than Hadwin, signing for a 75. The long hitter only found four fairways, which forced him to scramble more than he would have liked.

“It beat me up a little bit today,” admitted the Richmond Hill, Ont., native who put Winged Foot at the top of the list of toughest courses he’s ever played. “I didn’t hit many fairways or too many greens but my short game was pretty good and I made some really nice up and downs. Just didn’t have too many good looks for birdies.”

After nearly holing chip shots on 10 and 11, he finally got one to drop on 14 that led to his only birdie of the day.

Pendrith is playing in his first major championship and understandably started the week with some nerves. But after three rounds, he’s eased into the tournament.

Sunday for both players won’t be about winning the U.S. Open but there is still plenty to play for including trying to sharpen their games and decipher Winged Foot.

“I’m just having a ton of fun out here and embracing the challenge and whatever happens, happens,” summed up Pendrith.