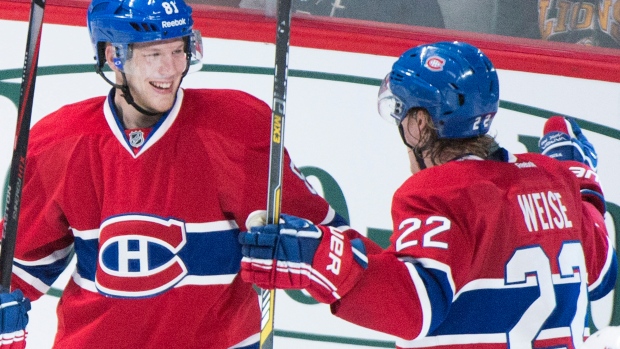 BROSSARD, Que. - Lars Eller feels the Montreal Canadiens are right about where they hoped to be at the midpoint of their NHL schedule.

The Canadiens (26-12-2) are in a battle for top spot in the Eastern Conference with 54 points heading into their 41st game — halfway through the 82-game schedule — on Saturday night against the visiting Pittsburgh Penguins.

They are ahead of a year ago, when they had 50 points at the halfway mark to finish fourth in the conference with 100 points. Then came a surprising run to the conference final before they were stopped in six games by the New York Rangers.

The challenge for the rest of the season to be to stay among the lead group in the east, which includes Pittsburgh, Tampa Bay, the rising New York Islanders and Detroit.

"Mentally, it's the challenge of going out every night and taking pride in wanting to be right up there with the best and not be satisfied," said Eller. "We've got a lot of young bodies.

"There are going to be times when we're a little bit tired, but it's the same for the other teams so I don't want to use that as an excuse. In the long run, it's about not being satisfied and challenging yourself to be the best you can be every night during the course of 82 games."

Their performance last season raised expectations for the Canadiens. They've met them so far, even if the team is widely considered to be still a top player or two away from being a Stanley Cup contender.

They've had scoring from three lines instead of the two that got most of the goals last season. The defence has so far held up well. And 27-year-old Price is having his best season.

"I don't think we put too much pressure on ourselves," said Eller, who has scored seven goals while continuing his strong defensive play as the third-line centre. "We expect a lot of ourselves.

"Once we get to the playoffs, it's a totally different thing. We'll talk about that when we get there. We're just trying to do as well as we can in the regular season."

General manager Marc Bergevin gambled in the off-season on moving out several veterans so younger players could take on more leadership.

Instead of naming a captain, the club put forward Max Pacioretty and defenceman P.K. Subban among a group of four alternate captains along with veterans Tomas Plekanec and Andrei Markov, while giving goalie Carey Price similar status without a letter on his jersey.

It has worked out well so far.

Pacioretty, the team scoring leader with 17 goals and 32 points, Subban and Price are among a core of players in their 20s who will likely form the heart of the team for the next several years, along with Eller, Brendan Gallagher, Alex Galchenyuk, David Desharnais and a few others.

But extensive changes were made last summer and into this season.

Newcomers are rearguards Tom Gilbert and Sergei Gonchar as well as forwards Manny Malhotra, Pierre-Alexandre Parenteau and Jiri Sekac. Defenceman Nathan Beaulieu was recently called up from AHL Hamilton and looks likely to stay. The same may happen with forward Sven Andrighetto. And Dustin Tokarski, who replaced the injured Price in the playoffs, is the new backup.

Another step came when coach Michel Therrien finally moved Galchenyuk, used mainly at left wing since he was drafted third overall in 2012, to centre on the top line with Pacioretty and Gallagher. To date, he is adapting well to the raised responsibility. And surprisingly, former top line centre Desharnais is thriving as a winger on the third unit.

"We're a little younger team than last year," said Therrien. "The younger guys are well supported by veterans like Markov, Gonchar and Plekanec. They're learning to become leaders, to do good things on the ice. So far, it's going pretty well and we'll continue in that direction."

Another improvement has been on faceoffs, where the addition of specialist Malhotra looks to have had a ripple effect. Malhotra has won 61.9 per cent of his draws, while Eller went from 53.2 per cent last season to 57 per cent and Plekanec has gone from 48 per cent to 50.6 per cent. Only Galchenyuk lags at 46.2 per cent.

However, Malhotra, who may no longer have 82 games in his system, was a healthy scratch twice in recent games and may be again against Pittsburgh. On Friday, prospect Christian Thomas was recalled from Hamilton. Andrighetto got most of the work at centre on the fourth line with Thomas and Michael Bournival on the wings.

Therrien would not confirm that Thomas will play, but said that while he is not specifically looking for more goals, he wants more "offensive zone time" from the fourth unit.

"It's a long season," said Therrien. "It's a marathon.

"What's important to me is that we get better every week. That's our focus. It's a challenge to make the playoffs. We understand there's lot of good competition and every game is tough."