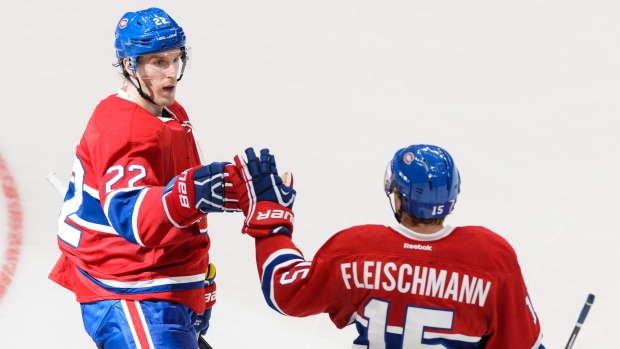 The Chicago Blackhawks are loading up as they attempt to repeat as Stanley Cup champions.

The Blackhawks acquired forwards Dale Weise and Tomas Fleischmann from the Montreal Canadiens on Friday in exchange for forward Phillip Danault and a second-round pick in 2018.

According to TSN Hockey Insider Bob McKenzie, the Canadiens retained 30 per cent of Weise and Fleischmann's salaries.

This marks the third trade in just over 24 hours for the Blackhawks, who acquired Andrew Ladd from the Winnipeg Jets on Thursday night and sent defenceman Rob Scuderi to the Los Angeles Kings earlier on Friday to acquire defenceman Christian Ehrhoff.

The winger is currently playing in the final season of a two-year, $2 million contract he signed prior to last season. He is set to become an unrestricted free agent this summer.

Weise has appeared in 313 career NHL games with the Canadiens and Vancouver Canucks, scoring 37 goals and tallying 85 points.

A veteran of 638 games, the winger has scored 133 goals and tallied 330 points in his career with the Canadiens, Washington Capitals, Colorado Avalanche, Florida Panthers. He is also set to become an unrestricted free agent this summer after signing a one-year, $750,000 deal with the Canadiens prior to the season.

McKenzie adds the Blackhawks may be done making moves, although clearing cap space by trading Bryan Bickell could change that.

Danault, 23, was selected in the first round (26th overall) of the 2011 NHL Draft by the Blackhawks.

The centre has appeared in 30 games this season with the Blackhawks, scoring one goal and adding four assists. Danault, a Victoriaville, QC. native, scored 13 goals and added 25 assists in 70 games with the AHL's Rockford IceHogs last season.

"Phillip Danault is a young and gifted player who will be part of our core group of young forwards for many years to come. I am very pleased to have him join our organization," Canadiens general manager Marc Bergevin.said in a statement. "As a member of the Blackhawks management group, I was instrumental in the selection of Phillip in the first round of the 2011 NHL Draft. Dale Weise and Tomas Fleischmann have both been good contributors to our team and I would like to wish them the best of luck with the Blackhawks' organization."

The Canadiens recalled forward Michael McCarron and defenceman Morgan Ellis from the AHL's St. John's IceCaps shortly after the trade.