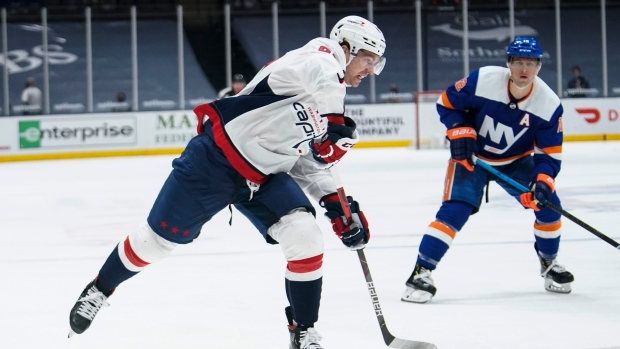 Evgeny Kuznetsov had a goal and two assists, and Nic Dowd, Garnet Hathaway and T.J. Oshie also scored as the Capitals won for the second time in three nights at Nassau Coliseum.

Washington, which also won 1-0 in a shootout on Thursday, remained in first place in the tight East Division, one point ahead of second-place Pittsburgh. The Islanders are in third, two points behind the Penguins, and three ahead of Boston.

“We generated some chances early in the game and that gave us momentum,'' Kuznetsov said. ”If we're missing a player like Alex, we have to step up."

The Capitals also improved to 17-7-2 on the road, one win ahead of Winnipeg for the most road wins this season. The Capitals have won five of seven meetings with the Islanders, and the teams meet for the final time during the regular season Tuesday in Washington.

“It was a tough game for us,? Islanders coach Barry Trotz said. ”We dug ourselves a little bit of hole, found our way out of it, then we put ourselves right back in a hole.”

Ovechkin missed the contest with a lower-body injury. It was the first game Ovechkin missed due to injury during the abbreviated 56-game season. The 35-year-old Ovechkin — sixth on the all-time goals list at 730 — also missed four games earlier while on the league’s COVID-19 list. The Capitals were 3-0-1 in those four game, including two wins over the Islanders.

“We were able to keep the lines intact and get contributions from everywhere,? Capitals coach Peter Laviolette said.

Ovechkin has 24 goals in 43 games this season. He hadn't missed a game because of an injury since March 2015 and has missed just 18 games during his 16-year career because he was hurt.

Sprong had his previous two-goal game against the Islanders in January 2018 when he playing for Pittsburgh. Laviolette said was confident inserting Sprong — a healthy scratch on Thursday — in Ovechkin's spot in a pinch and gratified with the result.

“He played a real good game,'' Laviolette added. ”He was dangerous. He was attacking the game with speed as well."

Samsonov improved to 13-3-1 this season and handed the Islanders just their third regulation loss in 25 home games (19-3-3). Samsonov also earned the shutout win over the Islanders on Thursday. The 24-year-old netminder has never started more than three straight games.

Trailing 2-1 after 20 minutes, the Islanders tied at 7:37 of the second as Pelech surprised Samsonov with a long slap shot on a coast-to-coast effort. It was his third goal of the season and first short-handed tally of his career.

Dowd put the Capitals back ahead for good with 7:39 left in the period when his high shot from the left faceoff circle eluded Sorokin. Sprong extended the lead to 4-2 about 2 1/2 minutes later. Defenceman Brendan Dillon assisted on both goals.

Pageau brought the Islanders within one with a power-play goal with 2:48 remaining in the second.

However, the Capitals maintained pressure in the third and added to their lead. Kuznetsov added his ninth of the season at 7:35 when his high shot eluded Sorokin, who had a difficult night while falling to 12-5-1 on the season.

Sprong added his second of the contest and ninth of the season with 5:17 remaining to complete the scoring.

"I thought our line created a lot chances from the start,'' Sprong said. “We clicked pretty well. We just have to build on it."

Hathaway notched his fifth of the season 2:33 into the game when his angled shot from the left corner eluded Sorokin. Oshie made it 2-0 at 10:55 with his 17th goal.

Beauvillier got the Islanders on the scoreboard with a power-play goal with 5 1/2 minutes left in te opening period as he knocked a loose puck past Samsonov for this 10th.

Pageau said he was glad the teams would play again following his squad's frustrating home loss.

”The nice thing is we have a chance to go back to Washington and hopefully steal the two points,'' he said. "We just have to focus on what we have to do. When we play and trust each other, that’s when we are at our best.”

Capitals defenceman Zdeno Chara played his 1,600th career game, 13th-most in NHL history. The 44-year-old Chara, a third-round selection by the Islanders in 1996, is in his first season with Washington after 14 seasons with the Boston Bruins. The 6-foot-9 blueliner won the Stanley Cup with Boston in 2011 and helped the Bruins reach the finals in 2013 and 2019. Chara also won the Norris Trophy as the NHL’s top defenceman in 2009 and is the fifth defenceman to reach the games milestone.

The Islanders have three players with active consecutive game streaks of at least 240 games: Brock Nelson at 293, Mathew Barzal with 280, Ryan Pulock at 242. All three players have appeared in every game since Trotz became the Isles’ coach to start the 2018-19 season.