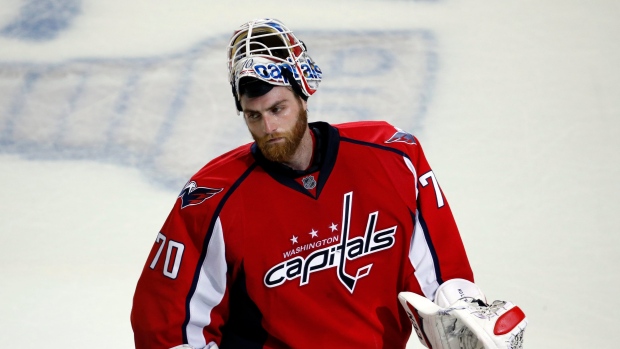 Braden Holtby and the Washington Capitals plan to keep rolling along against the Flyers despite an injury scare in practice.

Holtby, the goaltender who has stopped 91 of Philadelphia's 93 shots through three games of the first-round playoff series, left practice Tuesday with an apparent left leg injury after a collision with a teammate. Coach Barry Trotz said he expects Holtby to play in Game 4 on Wednesday (7 p.m. ET, NBCSN) as Washington goes for the sweep.

"Basically just got nicked up a little bit, went off and we'll see where he is," Trotz said. "But I don't anticipate Braden not playing."

Holtby was not made available to reporters after practice but walked through the locker room without a noticeable limp. Trotz said he didn't see a need to call up a third goaltender, implying Holtby would start with Philipp Grubauer backing him up.

The Capitals don't know which Flyers goalie they will face after starter Steve Mason allowed six goals on 27 shots in a 6-1 loss in Game 3 Monday that featured angry fans throwing light-up wristbands onto the ice. Former Washington goalie Michal Neuvirth could get the nod if Philadelphia makes a change.

"I feel good about my game," Neuvirth said. "If I play I'm going to play with confidence."

Washington will be forced to make one lineup change with defenceman Brooks Orpik out because of an upper-body injury. Orpik took a big hit from Ryan White in Game 3 and didn't return, an injury that will force more minutes for the top three of John Carlson, Karl Alzner and Matt Niskanen.

"Anytime you lose a guy like Brooks Orpik, with his experience, he's been through the grind before, it's tough," said Taylor Chorney, one of two options to step into the lineup along with veteran Mike Weber. "But at the same time, we've kind of been through it this year. He spent some time where he was hurt earlier in the year, and we had guys step up."

Based on the Capitals' domination in the series, it matters little who the sixth defenceman is. Washington is 8 for 17 on the power play, while Philadelphia is 0 for 13 and also hasn't managed to get much done 5-on-5.

"The special teams, obviously it's on paper. You can see it," Flyers forward Jakub Voracek said. "That's what's made a difference in this series."

The Capitals have a 3-0 series lead for the first time in franchise history, and Trotz has never been in this spot, either. More of the same seems to be the plan.

"I don't think we need to change anything than what we've been doing, and that's playing hard and consistent," Alzner said. "In a game like this, when it's do-or-die for your teammates, it's just playing smart and playing hard because you know they're going to throw everything at you."

The Flyers won't have forward Pierre-Edouard Bellemare in Game 4 as he was suspended one game for checking Capitals defenceman Dmitry Orlov from behind Monday.

Here's a look at the other Stanley Cup playoff games Wednesday:

The young Atlantic Division-champion Panthers will be tested as they try to bounce back from blowing a two-goal lead and losing Game 3 in overtime. A two-day break in the schedule gave them time to get composed following a game that included a coach's challenge negating a goal by Aaron Ekblad and an overtime winner by the Islanders' Thomas Hickey.

"It's not like we came in here and got beat 7-1," Florida coach Gerard Gallant said. "All three games are tight games and could've gone either way."

Each team has 10 goals in the evenly-matched series.

Despite being up in the series, the Stars have a lot to improve upon, starting with the power play, where they're 1 for 13 (7.7 per cent) for the fourth-worst conversion rate among the 16 teams in the post-season. Dallas had the fourth-best power play at 22.1 per cent during the regular season.

"The power play, for me, is a little bit stuck between playmaking and taking shots," coach Lindy Ruff said. "We've got to get back to attacking the net more."

Taking an underdog's mindset into Game 4 would be beneficial for the Stars, too. After building a 2-0 lead in Game 3 barely 4 minutes in, they let up on the accelerator while the Wild raced back.

Relaxing in that situation is a natural reaction for any team, but that won't help the Stars advance.

"It might've changed things," Patrick Sharp said after practice Tuesday. "You never know. We're never going to turn down a 2-0 lead early in the game, but it could've had an outcome on the way that we played."

After getting a dominant performance from top centre Anze Kopitar, more than 35 minutes of nearly flawless defence from Drew Doughty, sterling goaltending from Jonathan Quick and a big hit by Dustin Brown to get back into their series, the Kings are looking for their big stars to step up again to tie this series with a fourth straight win by the road team.

The concern for the Sharks is getting production beyond the first line. Joe Thornton, Joe Pavelski and Tomas Hertl have combined for five of San Jose's seven goals in the series.

"If you're playing on my line, the third line, the fourth line, you want to step up and do something," second-line centre Logan Couture said. "We can't sit on the bench and watch Jumbo's line go out there and carry the play. Everyone else has got to step up and do their part as well."

Stephen Whyno can be reached at http://www.twitter.com/swhyno