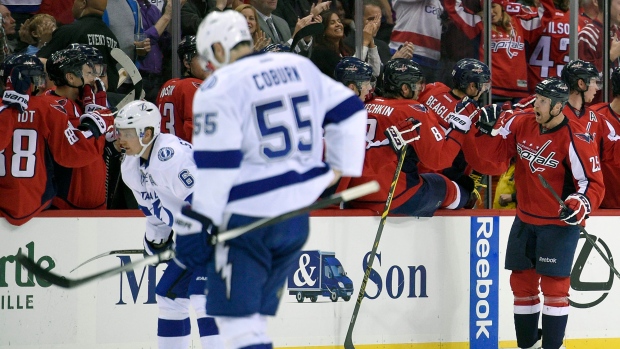 WASHINGTON - If Jason Chimera's reinvention as a power-play threat continues, he may have Evgeny Kuznetsov to thank.

Chimera notched a power-play goal off Kuznetsov's exceptional pass, and also had an assist during another man advantage to help the Washington Capitals defeat the Tampa Bay Lightning 4-2 on Friday.

"He makes things a little easy," he said of Kuznetsov, whose team-leading 18 assists include two to Chimera on the man advantage. "It's just one of those things where, he's a special kid, special player. He's making me look good, that's for sure."

Kuznetsov and Chimera also linked up on Alex Ovechkin's opening goal. T.J. Oshie scored for the third time in four chances against Tampa Bay's penalty kill unit, which hadn't allowed a goal in four previous games. The Lightning had killed 44 of 49 penalties (89.8 per cent) over the previous 18 games.

"They do a couple things that other teams don't do," said Trotz. "I think we identified it and took advantage of that."

Marcus Johansson added an even-strength goal in the Capitals' fourth straight victory, and Braden Holtby made 32 saves in his sixth straight win.

Andrei Vasilevskiy made 33 saves for the Lightning, who had their three-game winning streak snapped.

Brian Boyle and Victor Hedman scored late for Tampa Bay, which rested No. 1 goaltender Ben Bishop in the first of back-to-back games and trailed 4-0 early in the third.

"You've got to be sharp and for whatever reason we didn't start the way we wanted to," Boyle said. "I don't know if we were too respectful of some of their skill or what, but it wasn't our game for the first 50, 45 minutes."

It could've been worse after Washington registered 18 shots before the first intermission, its most in a period this season. But it was only 1-0 after Ovechkin's 12th goal, a wrister into the top right corner of the net off Chimera's pass from behind the goal line.

"We drew penalties because of our pressure on them," Trotz said. "We weren't able to capitalize a lot 5 on 5, but I think it paid dividends because of the penalties they had to take. "

Chimera scored late in the second. Kuznetsov got the puck in the right circle and rose his stick as if to shoot. Instead, he guided a hard pass toward Chimera at the back post, who had position on Anton Stralman and redirected the effort easily past a stranded Vasilevskiy.

"You work on stuff in practice, you work on stuff in games, it's just one of those things that you do (with) repetition," Chimera said. "You just kind of go to the back door and he's going to slide it there. So it was a nice play."

It was 3-0 just over a minute later when John Carlson's feed re-directed off Johansson's skate, with officials ruling Johansson did not make a kicking motion. Oshie added his sixth goal to make it 4-0 in the fourth on a ferocious one-timer from Nicklas Backstrom's cross-ice feed.

Notes: Tampa Bay C Tyler Johnson played only the game's opening shift in his second game back following an upper body injury. The team did not specify a reason for his departure. ... In his 1,300th game, Capitals coach Barry Trotz picked up his 618th NHL win, passing Jacques Lemaire for 11th all time. ... Washington D John Carlson played in his 400th consecutive NHL game. ... Capitals RW Chris Brown was scratched despite re-joining the team from AHL Hershey on Thursday. ... Stralman played in his 500th NHL game.