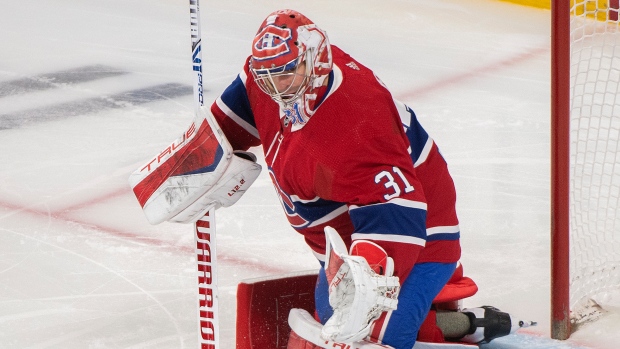 NEW YORK — Montreal Canadiens goaltender Carey Price is one of three finalists for the 2022Bill Masterton Memorial Trophy, awarded to the NHL player who "best exemplifies the qualities of perseverance, sportsmanship and dedication to the game."

After helping the Canadiens reach the Stanley Cup final in 2021, the 34-year-old Price suffered numerous setbacks in returning to the game.

The franchise's all-time leader for games and wins by a goaltender underwent knee surgery last summer.

The Vezina and Hart Trophy winner in 2015 also sought help from the NHLPA/NHL player assistance program in October for substance abuse.

Hayes entered the 2021-22 season following the sudden death of his brother, former NHLer Jimmy Hayes, and on three occasions required surgery to overcome injury and a blood infection to return to the Flyers lineup.

The trophy, voted on by members of the Professional Hockey Writers Association, has been awarded since 1968.

It's named in memory of Minnesota North Stars player Bill Masterton, who died Jan. 15, 1968, of head injuries sustained during a game.