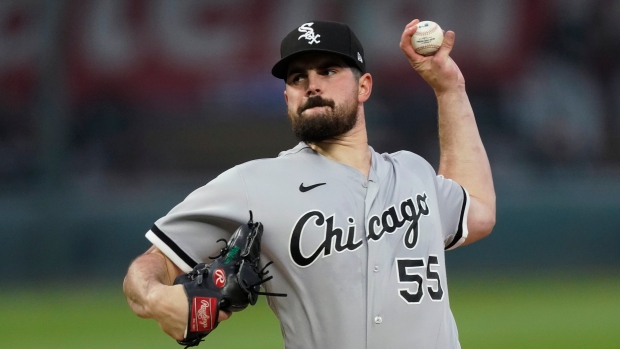 The Royals were blanked for the second straight game in part of a six-game losing streak, all to division opponents.

“We didn't put pressure on (Rodón),” Royals manager Mike Matheny said. “We didn’t have many chances. He kept us off balance.”

Kansas City threatened with two on and one out in the fourth, but the righty worked out of the jam with back-to-back strikeouts.

Relievers Codi Heuer, Aaron Bummer and Liam Hendriks worked the final three innings to complete the shutout. Hendriks earned with sixth save. “We have the making of a bullpen with a lot of depth,” White Sox manager Tony La Russa said.

Collins opened the scoring in the fifth inning with a solo shot to centre. “I was trying to put together a good at-bat," Collins said. "I got the barrel to it, and it got out.”

It was just the 26th home run of the year for the White Sox, which is 28th in the league.

Brad Keller (2-4) gave up three runs off five hits in six innings of work with a season-high six strikeouts and a walk. The bulk of the damage came in the sixth inning with RBIs from Adam Eaton and Jose Abreu.

“We put a couple of good at-bats together, Keller had really good stuff," La Russa said. We did enough but credit to Keller, he was good. We just kept after it."

Salvador Perez led the Royals, going 4 for 4 with a double.

Kansas City has lost 11 of the last 13 matchups with Chicago dating to last season.

White Sox: OF Luis Robert (right hip flexor) will not need surgery but faces a prolonged stint on the 10-day injury list.

Daniel Lynch (0-0, 5.79 ERA) will make his second career start for the Royals. Lance Lynn (2-1, 1.82 ERA) will counter for Chicago. Lynn tossed a complete-game shutout with 11 strikeouts in his last start against Kansas City.