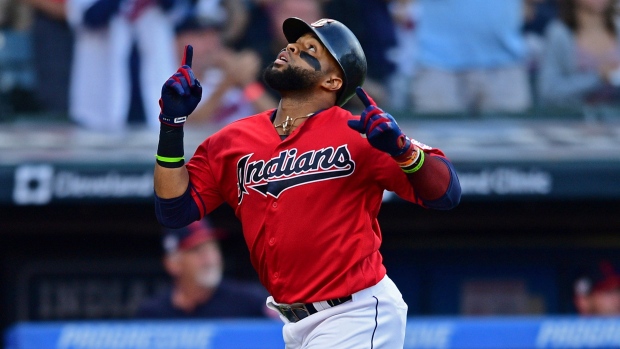 CLEVELAND — With the AL Central in danger of slipping away for the Cleveland Indians, Carlos Santana delivered.

Santana, coming off his first career All-Star appearance, hit a solo home run that broke a seventh-inning tie and the Indians avoided a sweep with a 4-3 win over the first-place Minnesota Twins on Sunday.

All-Star MVP Shane Bieber helped Cleveland salvage the finale and close within 6 1/2 games of the Twins.

"We lost the first two, but came back in the game today," Santana said. "It's great. It's positive. We're playing good baseball."

Santana lined an 0-2 pitch from Trevor May (3-2) into the right-field seats for his 21st homer of the season.

Bieber, who struck out the side in his one inning against the NL on Tuesday night in front of a hometown crowd, took a three-hit shutout into the seventh before Minnesota rallied with three runs and tied the game.

Two replay reviews — both resulting in a Minnesota batter being hit by a pitch — played a major role in the inning.

Bieber, who was given a loud ovation when he took the mound to start the game, admitted the unusual inning was frustrating.

"That's the way the game is," he said. "Sometimes things don't go your way. Unfortunately that's kind of what replay is for."

Luis Arraez drew a leadoff walk in the seventh and Mitch Garver was hit by a pitch, a call that was upheld after a Cleveland challenge. Marwin González's single scored Arraez and Miguel Sanó's single loaded the bases.

Bieber's 0-2 pitch to Jake Cave was ruled a foul ball, but the Twins challenged the call. The replay showed the ball hit Cave on the hand, forcing in a run and cutting the lead to 3-2.

The Twins had the momentum, but only for a moment.

"It's nice for us to get punched in the stomach and come right back," Indians manager Terry Francona said. "That was a good ending too. That would've been a tough day."

While the Twins were pleased to leave town with a series win, May knew a sweep was in their grasp.

"This stings more than another game because that's one you want to steal with the way Bieber was throwing and we gave ourselves a chance," he said.

Adam Cimber (5-2) pitched 1 1/3 innings and worked out of two jams. The right-hander struck out Nelson Cruz with the bases loaded to end the seventh and whiffed Sanó with the tying run on second to finish the eighth.

Brad Hand pitched the ninth for his 24th save in 25 opportunities. Second baseman Jason Kipnis misplayed Ehire Adrianza's grounder to start the inning, but Hand struck out the next three batters, including Polanco in a matchup of All-Stars.

José Ramírez gave Cleveland a first-inning lead with a run-scoring double. Greg Allen and Tyler Naquin had RBI singles in the fourth.

"We showed them why we're in first place," he said. "It was another competitive game in the fight for the division."

Twins centre fielder Byron Buxton was out of the lineup after leaving Saturday's game. He made a head-first, diving catch on Oscar Mercado's sinking liner in the eighth.

Twins: OF Eddie Rosario (sprained left ankle) ran the bases and took flyballs before the game. He has been on the 10-day injured list since June 28, but could be activated when Minnesota returns home Tuesday.

Indians: Naquin returned after missing two games with a sore back. He had two hits with an RBI and a stolen base.

The teams play 10 more times and the Twins have won five of the nine matchups.

"We have a lot to be happy about," manager Rocco Baldelli said. "We had a very nice series. If we play like this going forward, I think we're going to be OK."