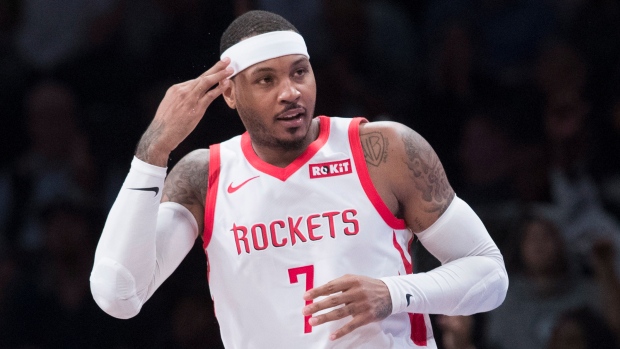 Carmelo Anthony says he still wants to play in the NBA.

The 10-time All-Star appeared at the Lou Gehrig Sports Awards Benefit in Manhattan on Thursday night and restated his intent to return.

“Two thousand per cent,” the 35-year-old Brooklyn native said about his desire. “Make that the headline.”

Does Carmelo Anthony still want to play in the NBA?

"2000 percent. Make that the headline." pic.twitter.com/rU8aqEYUfy

Anthony has been a free agent since being waived by the Chicago Bulls last February. He had been traded to Chicago by the Houston Rockets with whom he signed in the summer of 2018, but appeared in only 10 games prior to being deactivated.

The Syracuse product says the fact that he currently isn't signed is a "surprise" to him.

“I don’t really want to get into all that," Anthony said. "I’m surprised, of course. But it is what it is at this point, though. I’m sitting back waiting to see what happens, spending time with the family right now, and that’s all I can focus on, and other things I have going on."

A three-time Olympic gold medalist, Anthony has career averages of 24.0 points on .449 shooting, 6.5 boards and 3.0 assists over 35.8 minutes a night in 1,064 games over 16 seasons with the Denver Nuggets, New York Knicks, Oklahoma City Thunder and Rockets.