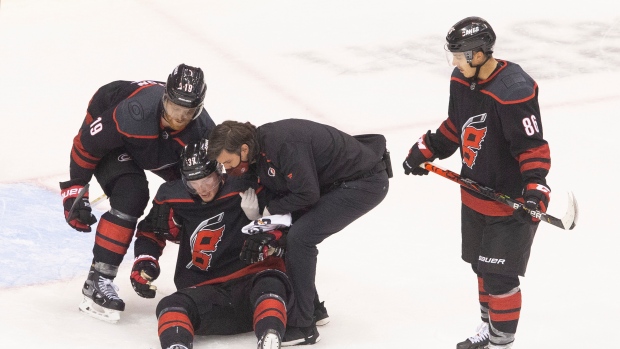 The Carolina Hurricanes will be without forward Andrei Svechnikov and defenceman Joel Edmundson for Monday's Game 4 against the Boston Bruins, head coach Rod Brind’Amour announced.

"It's unfortunate," Brind'Amour said of the injury on Sunday. "I think the ice conditions at that time of the game had a lot to do with it. It's really slushy and your skates dig in a little more at that point and it's just unfortunate. Toes digging in and two guys battling in front, that's part of the game."

The 20-year-old has four goals and seven points in six games since the NHL restarted play earlier this month. He had 24 goals and 61 points in 68 games during the regular season.

Edmundson, 27, has not played since Game 1 against the Bruins. He has one goal in four playoff games.