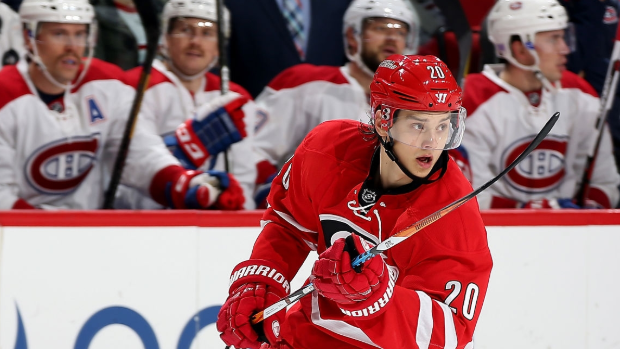 The Carolina Hurricanes took their full week to match Sebastian Aho's offer sheet from the Montreal Canadiens, but according to general manager Don Waddell, the decision to match was made much sooner than that.

In fact, Waddell told NHL.com that the Hurricanes, who announced their intention to match after just one day, knew they would be keeping Aho within two minutes of receiving the five-year, $42.27 million offer.

"Everybody thinks we're not in a big so-called hockey market, but we're fortunate to have an owner that's been very successful in life and the one thing he recognizes is talent and assets," Waddell said. "We certainly weren't going to let this asset get away from us at this point. We got the offer at 2:40pm on that Monday and we knew at 2:42, once we both had a chance to read it, that we were going to match it."

Aho's agent, Gerry Johannson, said after his client signed the offer sheet that he believed Aho "100 per cent wants to play in Montreal." Waddell, who admitted the team would have liked a longer term on Aho's contract, said the star centre simply used the offer sheet to speed up the restricted free agent process.

"We talked. He wants to be here," Waddell said. "The agent told him this is a way to get this contract one way or another and not have to go through it (all summer). It's part of the CBA, it's part of the business, and you just have to accept it. I think you put it behind you. Sebastian is a great kid and I know what he's meant to our franchise, so I think everybody at the end of the day is very pleased with the outcome of him being a Hurricane for at least the next five years."

Waddell and the Hurricanes acquired goaltender James Reimer from the Florida Panthers this off-season, sending Scott Darling, who was quickly bought out, the other way. Despite Reimer's $3.4 million cap hit, Waddell said he won't be guaranteed the backup spot behind Petr Mrazek, who inked a two-year, $6.25 million extension this off-season.

Instead, the 31-year-old will have to battle in camp with rookie Alex Nedeljkovic and fellow off-season addition Anton Forsberg.

"No. I look at it differently. You've got Mrazek, who played well for us last year. I think the next job is for one of three guys, whoever wants that job," Waddell said. "We're in a spot that we need to win hockey games. We've got to put the best guys out there each night to win hockey games. We proved it last year when we ended up sending (Scott) Darling down, who was making a lot of money in the minors."

The Hurricanes have $2.5 million in cap space and Waddell said the team continues to hope captain Justin Williams will extend his playing career by another season, but would otherwise be an unlikely to make another move in free agency.