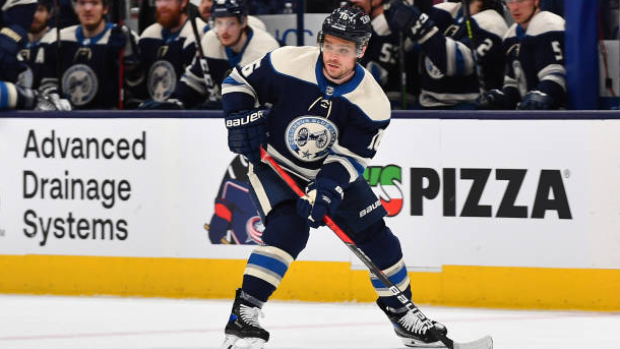 The Columbus Blue Jackets have traded forward Max Domi to the Carolina Hurricanes as part of a three-team trade with the Florida Panthers, the team announced on Monday.

The Hurricanes will receive Domi and defenceman Tyler Inamoto. The Blue Jackets will receive defenceman Aidan Hreschuk from Carolina while the Panthers will receive forward Egor Korshkov and a Columbus' sixth-round pick in 2022. Florida will also retain 25 per cent of Domi's contract.

Official! The #Canes have acquired Max Domi and Tyler Inamoto in a 3-team trade.

The son of former NHLer Tie Domi has played in seven NHL seasons with the Blue Jackets, Montreal Canadiens and Arizona Coyotes and tallied a career-high 28 goals and 72 points in 82 games with the Habs in 2018-19.

Drafted 12th overall by the Coyotes in 2015, he carries a $5.3 million cap hit this season and will become an unrestricted free agent this summer.

The move came shortly after the Hurricanes inked 21-year-old centre Jesperi Kotkaniemi to an eight-year, $38.56 million contract extension on Monday.

The deal carries an average annual value of $4.82 million.

The Hurricanes and Kotkaniemi were reported to be working on an extension but it could not be made official until after the trade deadline.

Kotkaniemi, 21, joined the Hurricanes in September after the Montreal Canadiens declined to match a one-year, $6.1 million US offer sheet.

Kotkaniemi, who spent his first three seasons with the Canadiens, has amassed 33 goals and 52 helpers in 225 career NHL games. He was drafted third overall by the Canadiens in 2018.

The Hurricanes currently lead the Metropolitan Division with a record of 40-12-5.