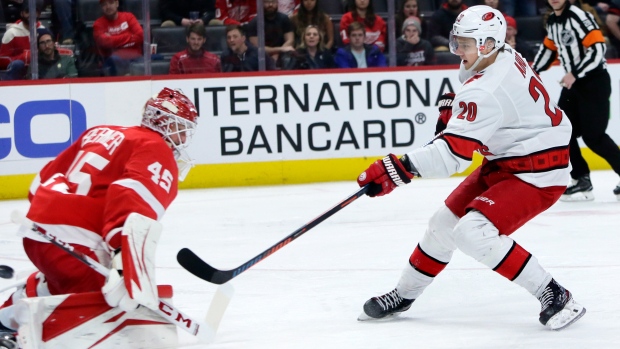 DETROIT — Justin Williams scored a tiebreaking goal 1:38 into the final period, and Sebastian Aho added two goals later in the third to give the Carolina Hurricanes a 5-2 win over the Detroit Red Wings on Tuesday night.

Morgan Geekie and Nino Niederreiter also scored for Carolina, which extended its winning streak to three games and pulled even with Columbus for the first wild card in the Eastern Conference. The New York Islanders had a chance to join that tie as well when they faced Vancouver later Tuesday night.

Tyler Bertuzzi and Christoffer Ehn scored for the Red Wings, who had their modest two-game winning streak snapped. Detroit is assured of the NHL's worst record this season.

“If you look at the standings, and this is a game you expect to win — you should win,” Williams said. “You have to respect the game of hockey and the fact that you've got to punch in, you've got to put the work in. You have to outplay the other team.”

Williams has scored in five straight games. With the Hurricanes on a power play, Andrei Svechnikov sent a pass from behind the net and Williams slammed it past goalie Jonathan Bernier to put Carolina up 3-2.

The Hurricanes added a short-handed goal later in the third on a breakaway by Aho. Then he completed the scoring with Carolina's third power-play goal of the night.

“I thought for 40 minutes, I thought we played pretty well — real well at times," Red Wings coach Jeff Blashill said. "Obviously, in the third, they out-specialty teamed us.”

Petr Mrazek, who had been dealing with a concussion, played in goal for Carolina for the first time since Feb. 22. He made 23 saves against his former team.

Geekie had two goals and an assist in his NHL debut at Pittsburgh on Sunday. He opened the scoring in the first period Tuesday, but Bertuzzi tied it.

Niederreiter and Ehn traded goals in the second.

“It wasn't a great game for us, for sure," Hurricanes coach Rod Brind'Amour said. "I thought we buckled down and played a pretty decent third.”

NOTES: Detroit had a chance to match its longest winning streak of the season. The Red Wings had a three-game run from Nov. 8-12. ... Detroit's Luke Glendening played his 500th game. ... Svechnikov appeared to score in the third, but the goal was overturned after an offside review. He is two points shy of 100 for his career.