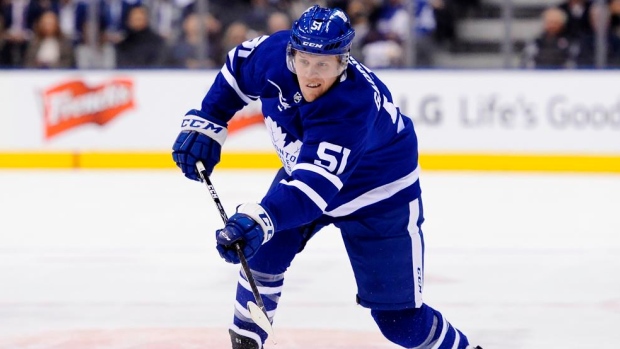 The Carolina Hurricanes have signed defenceman Jake Gardiner to a four-year, $16.2 million contract.

The 29-year-old recorded 30 points in 62 games this past season with the Toronto Maple Leafs, missing significant time due to a back injury. He returned for the postseason, posting two assists in seven games.

Gardiner will carry a cap hit of $4.05 million in each year of the contract.

"Jake is a solid veteran blueliner with a proven history of contributing offensively, including on the power play," Hurricanes general manager Don Waddell said. "He's had options this summer, but ultimately decided that Carolina is his best fit, and we're thrilled to have him here."

Gardiner was a first-round pick (17th overall) of the Anaheim Ducks at the 2008 NHL Draft. He was traded to the Maple Leafs along with Joffrey Lupul and a pick on Feb. 9, 2011 in exchange for defenceman Francois Beauchemin. He appeared in 551 games with the Maple Leafs upon making his NHL debut with the team in 2011 and posted 45 goals and 245 points.

"For always wearing the blue and white with passion and pride, thank you for everything, Jake," the Maple Leafs posted on Twitter Friday.

For always wearing the blue and white with passion and pride, thank you for everything, Jake. pic.twitter.com/jBSnkllA3C