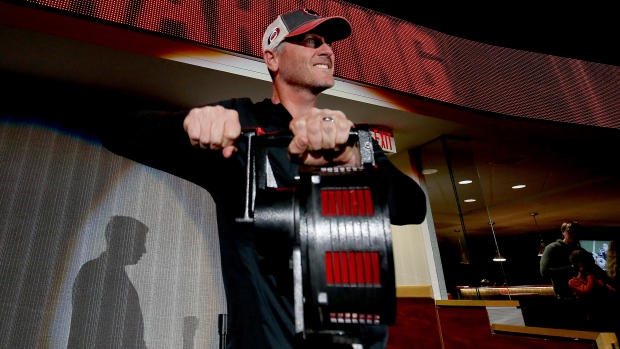 As the dust settles on an intriguing offseason for the Carolina Hurricanes and Montreal Canadiens, TSN Hockey Insider Pierre LeBrun, in a story for the Athletic, spoke to Hurricanes owner Tom Dundon about a number of topics, including the team’s offseason, moves, the offer sheet story between the ‘Canes and Habs, and how he views the investment in forward Jesperi Kotkaniemi.

The Hurricanes made waves by signing then Canadiens’ restricted free-agent Kotkaniemi to a one-year, $6.1 million offer sheet late last month, which the team did not match.

The belief was that Dundon and Hurricanes general manager Don Waddell offer sheeted the Finnish forward in response to the Canadiens' offer sheet of Canes’ forward Sebastian Aho in 2019. However, Dundon attempted to dispel those rumours.

“There was no grand plan...we didn’t set out to do this two years ago, even a month before,” Dundon told LeBrun. “There’s always lots of options to look at based on the order things happen. When this came up, this one actually worked.

“If we had re-signed Dougie [Hamilton] or 10 other things we tried to do, this doesn’t come up. But when you’re sitting there with a bunch of cap space that you’re not going to be able to use and looking at your choices - we went through many, many choices - this just happened to be the one that ended up being executed.”

Kotkaniemi was selected third overall by the Canadiens in the 2018 NHL Draft and played three seasons with the club. In 171 NHL games, the 21-year old scored 22 goals and added 40 assists, including five goals and 15 assists during the shortened 2020-21 season.

To this point in his career, Kotkaniemi has not produced like a $6.1 million player, but Dundon noted that the opportunity to successfully acquire a player via offer sheet is rare and was willing to pay the contract in hopes that the young forward will live up to the lofty price tag.

“Well we’ll see, if he plays good then it’ll make a lot of sense,” said Dundon. “If he doesn’t play as well as we’d hoped, then no matter what we do it won’t make sense.

“But the contract is the easy part. If you pay the money to players who play really well, then it sort of doesn’t matter. The number is the number. But they got to play good. You don’t win if they don’t play good, regardless of their cap number.”

Dundon reiterated that he did not intend to send a message to other teams with the offer sheet but said that whatever perception the league held about him or the organization prior to the dueling offer sheet fiasco was wrong.

“No, it might be true that that happened, but it had nothing to do with the decision,” he said. “But it was always strange to me that [the Aho offer sheet] happened in the first place, right?

“Obviously, whatever the perception was about our organization or me when the first offer sheet happened was clearly inaccurate."