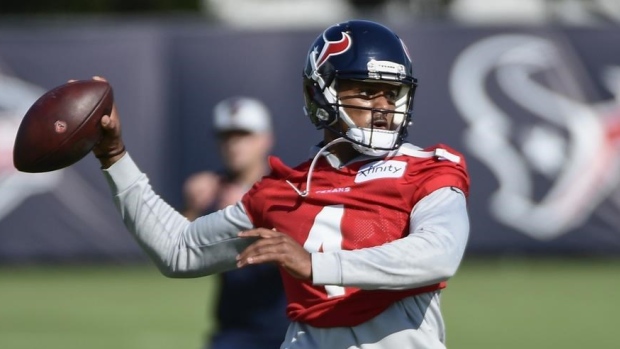 It appears the Carolina Panthers are out of the Deshaun Watson sweepstakes.

According to Ian Rapoport of NFL Network, the Panthers are not expected to pursue the Houston Texans quarterback, who has only waived his no-trade for the Miami Dolphins to date.

Sources: Owner David Tepper and the #Panthers are not expected to pursue #Texans QB Deshaun Watson at this time. The QB has only waived his no-trade clause for the #Dolphins.

Watson has not played a snap this season, currently facing a number of civil lawsuits alleging sexual assault.

A native of Gainesville, GA, Watson is a three-time Pro Bowler. The 12th overall pick of the 2017 NFL Draft, Watson started all 16 games for the Texans last season, throwing for a league-leading 4,823 yards on 382-for-544 passing with 33 touchdowns and seven interceptions. He rushed for another 444 yards for three TDs.

The Panthers, who started the season 3-0, have dropped to 3-4 with off-season addition Sam Darnold struggling at quarterback. Carolina will visit the Atlanta Falcons (3-3) on Sunday.