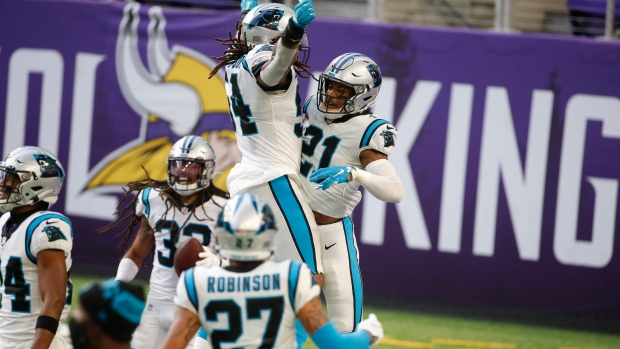 Carolina Panthers rookie Jeremy Chinn had not one but two fumble recovery returns for touchdowns in the first 69 seconds of the third quarter at Minnesota.

Chinn picked up the ball after Zach Kerr’s sack of Kirk Cousins and took it back 17 yards for the score. Then on the very next play from scrimmage, Vikings running back Dalvin Cook lost the ball at the end of a short carry, a forced fumble credited to Chinn. The second-round draft pick from Southern Illinois emerged from the pile and broke away for a 28-yard touchdown.

Cook was hurt during the play and needed assistance to leave the field with an apparent injury to his right leg.

According to Pro Football Reference research, Chinn became the first player in the NFL since 1948 to return two fumble recoveries for touchdowns in the same game.