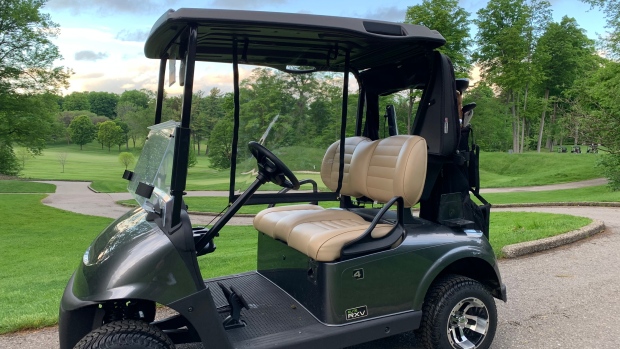 One of the stipulations of provincial governments allowing the return of golf in Canada was that motorized carts would be only for single riders. Two players seated on a vehicle would break the two-metre social distancing recommendation.

The result has been a flurry of lone riders.

But as with a number of innovations that have come out during the pandemic, several companies believe they have a solution to that problem – a barrier between driver and passenger.

Shaver Industries, located in Kitchener, Ont., has been in the business of making industrial enclosures since 1986, with companies such as Tesla and Sobeys as clients. It’s also been creating face shields for use by front-line workers.

Two of the company’s principles, Mark Shaver and Matt Gazzola, also happen to be avid golfers. That’s the reason why Brad Duench, the general manager of Westmount Golf and Country Club, reached out to them to see if they could devise a barrier that would allow two riders to safely use one cart.

As with just about every course in Canada, Westmount had an issue with carts. With a single-rider limit, it meant that one group would need four carts if all the players decided to ride rather than walk. That led to a shortage of carts at some facilities, as well as a lot more wear and tear on the course.

“Brad came to us to ask if we could manufacture something,” said Shaver. “We jumped right into a prototype and had one in about 24 or 48 hours.”

After measuring the different brands of carts, the concept soon became the Driver Divider, a curtain of industrial-grade, clear PVC plastic that attaches to the top of the car with Velcro and uses Bungee cords to hold it down. The unit provided a barrier between the two riders, allowing them to ride in the same cart.

“We built a website for the product overnight and reached out to media and our MP and MPP to try and spread the word,” said Gazzola.

Despite being in business less than a week, the Driver Divider has attracted lots of attention and is in use in private and public courses throughout Southwestern Ontario.

At the other end of the province there is another style of divider with the same intention of separating driver and passenger.

EzGARD is a company that creates barriers for retail and government operations. If you’ve shopped at a major retail outlet or gone into a government office in Canada, you’ve probably been in front of their products.

Not surprisingly, the Ottawa company is currently producing barriers every two to three minutes, 24 hours a day, to ship out across North America.

The company’s president, Terry McLaughlin, also happens to own Dragonfly Golf Links in Renfrew, Ont., despite not being a golfer. He was approached by Mark Seabrook, the general manager of nearby Canadian Golf and Country Club, about coming up with a solution to the single-cart dilemma.

“Within a day, I had so many different brands of carts at my place and we came up with divider that covers almost every open space between the two seats,” said McLaughlin.

The EzGARD model is made of hard Lexan thermoplastic and is fixed to the car. The only space is to allow for the opening of the seat to service the battery or add gas, depending on the model.

McLaughlin said his barrier isn’t something that will be removed any time soon. He expects most to be kept in place through the end of the year and possibly into next year. However they are able to be power washed and the cart can undergo its regular operation with the shield in place.

He admits that he wasn’t intending to get into a bigger production, but the demand seems to be changing his mind.

“I like to think ours is the best model and we’ve had a lot of calls about it,” he said. “People seem to like driving together. I’ve even seen them high-fiving each with the glass in between.”

Both companies are finding that the usage of the barriers isn’t just for golfers. Maintenance staff also has limitations in riding vehicles to the point where it’s limited their ability to do timely grooming of the course. The simple act of allowing two riders per cart can help speed things along.

The safety protocols at golf courses are plentiful, but of course they aren’t perfect. The dividers are only safe if used in concert with other precautions. The onus is still on the individual player to ensure he or she takes all the necessary precautions. But adding cart dividers may allow more players to get out on the course and to possibly enjoy a game they couldn’t before.