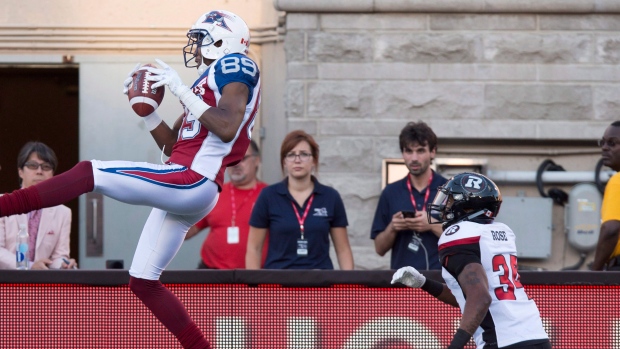 Duron Carter and the CFL Players' Association is considering appealing the suspension handed down to the Montreal Alouettes receiver on Monday.

Carter was given a one-game suspension for bumping into Ottawa Redblacks head coach Rick Campbell in Friday's Week 2 game.

TSN Senior Correspondent Gary Lawless reports that one team executive suggested Carter may have been concussed when he went into the Redblacks' bench. Carter was hit hard as he made a catch in the end zone in the third quarter of the game.

Calgary Flames defenceman Dennis Wideman struck linesman Don Henderson during an NHL game in January and was suspended 20 games for abuse of officials. Commissioner Gary Bettman upheld the number on appeal before an arbitrator later reduced it to 10 games, citing a lack of evidence that Wideman intended to injure Henderson.

The NHLPA argued that the hit Wideman took before the incident resulted in a concussion, thereby temporarily altering his mental state.

Should the CFLPA decide to appeal the league’s decision, Carter will be eligible to play until the conclusion of the case.

The Alouettes have a bye this week. Montreal's next game is at home against Hamilton on July 15.