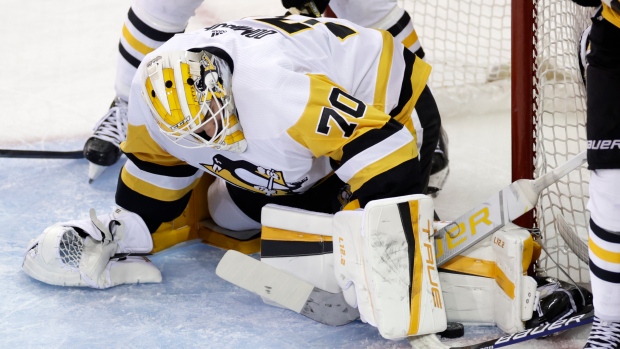 Forced into the net in double overtime after an injury to Casey DeSmith, Louis Domingue backstopped the Pittsburgh Penguins to a 4-3 triple overtime Game 1 win over the New York Rangers on Tuesday.

Domingue, who made just two starts for Pittsburgh during the regular season, was elevated to the backup role with starter Tristan Jarry injured to begin the series. He entered in relief of DeSmith, who had an apparent leg injury, midway through the second overtime frame. The 30-year-old made 17 saves, holding the Penguins in the game until Evgeni Malkin scored on a deflection 5:58 into the third overtime.

“I saw him go to the bench and I wasn't sure why they blew the whistle,” Domingue said of DeSmith. “I know both of the referees that were there, Jonny Murray and Frederick L'Ecuyer, both French guys. I honestly thought they were joking with me - they were saying I had to go in. After that, I just go out and played. It's crazy, but I guess that's my life. It's hockey."

Domingue, a veteran of 142 regular-season games, had a appeared in a playoff game just once before in his career, making seven saves in a relief appearance for the Tampa Bay Lightning in the 2018 playoffs.

“It was a lot coming at me fast,” said Domingue. “But it's something you prepare for as a backup. You got to be ready at all times.”

At the opposite end of the ice, Rangers goaltender Igor Shesterkin made 79 saves in a losing effort.

“He’s our best player and showed it again tonight," Rangers forward Ryan Strome said of Shesterkin. "I thought we played a good game — a lot of guys battled really hard. ... A lot of gutsy efforts by a lot of guys, unfortunately just came out on the wrong side of a 4-3 triple overtime great hockey game.”

Game 2 of the series will take place Thursday in New York, with the series moving the Pittsburgh for Game 3 on Saturday.