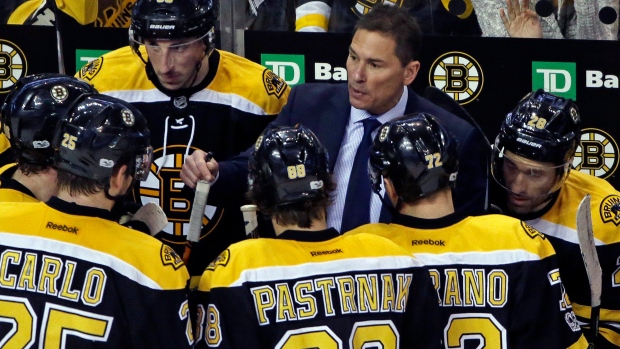 Nine months removed from the opening of the 2018-19 regular season, we need one last day to decide this year’s Stanley Cup champion.

The Boston Bruins forced a Game 7 with one of their most impressive road performances of the playoffs in a 5-1 victory over St. Louis on Sunday. Five different skaters – Brad Marchand, Brandon Carlo, David Pastrnak, Karson Kuhlman, and the ageless Zdeno Chara – scored for the Bruins, while Conn Smythe favourite Tuukka Rask stopped 28 of 29 shots to keep the Blues attack at bay.

Now the Bruins return home, which should prove advantageous for myriad reasons. They get to play in front of a raucous Bruins crowd at TD Garden, a place where Boston has won a whopping 68 per cent of games this season. Just as interesting: head coach Bruce Cassidy will get control of the matchups, which he has used to his advantage all season long.

Out of curiosity, I went and pulled all of the matchup and usage data from Boston’s three home games in this series to see how Cassidy has thought about his lineup’s deployment against St. Louis in the past. Running through the data, there are clearly some matchups Cassidy has prioritized.

The below table shows percentage a Boston player’s total minutes head-to-head against a given player from the St. Louis side: 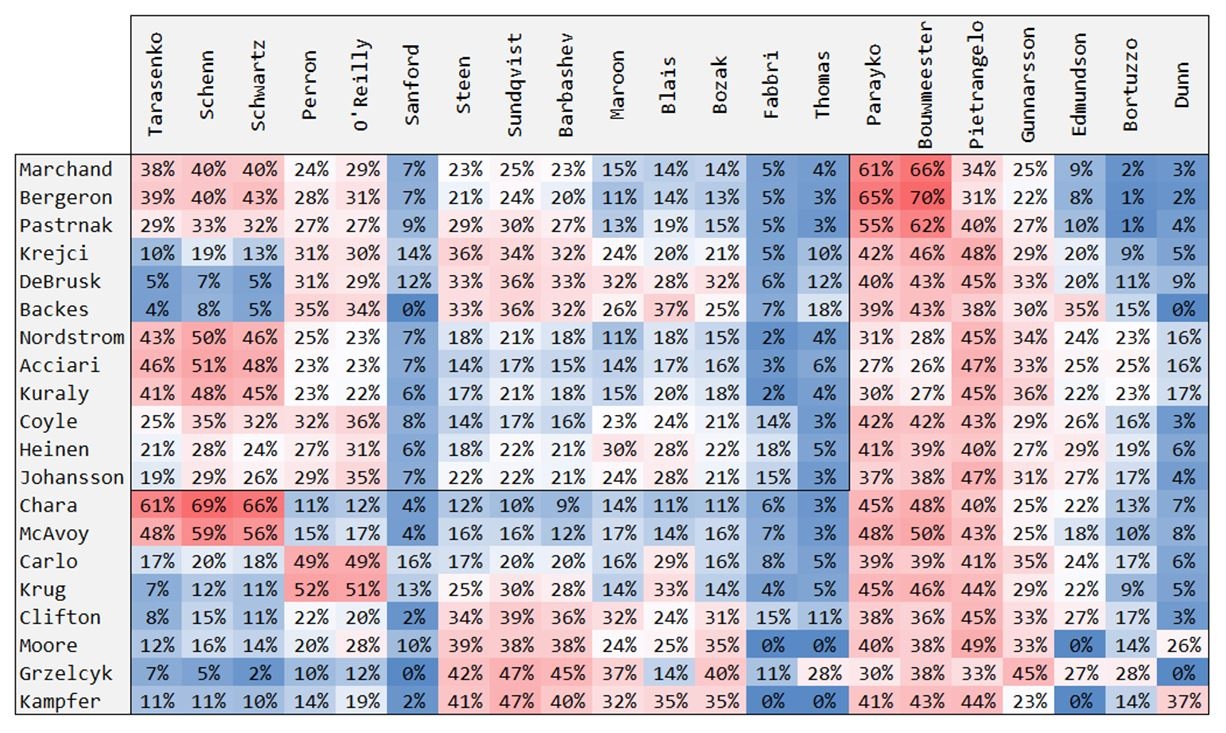 One data point that jumps off of the page to me is how Boston is handling the vaunted Vladimir Tarasenko-Brayden Schenn-Jaden Schwartz line. The Blues’ top unit has been on fire all postseason and has been the one line that has given Boston some real trouble in the series, as you would expect.

The Bruins are basically throwing two combinations of five-man units at this group when they have last change. The first is the Marchand-Patrice Bergeron-Pastrnak line, anchored by Chara and Charlie McAvoy. In the event that the Boston shutdown line isn’t available for use, the Bruins have been leaning on the Noel Acciari- Joakim Nordstrom -Sean Kuraly line in front of the aforementioned Chara and McAvoy pairing.

It’s impossible to completely shut down the Tarasenko line (true for any team!), but the Bruins have mitigated the damage they’ve done in the series. A lot of that is because they have been effective in spots – save for a bit of a debacle in Game 2 – at keeping the Tarasenko line on the perimeter.

If you look at the series to date, the Tarasenko line has managed about 56 per cent of the shots while on the ice at 5-on-5, but scoring chances (51 per cent) and expected goals (49 per cent) are much closer to break-even.  And all in, they have been on the ice for just four goals and a plus-two goal advantage. They’ve been successful, but it’s not the type of series-changing performance that we’ve seen from this line in recent history.

Boston focusing on the matching St. Louis’ top line creates other natural matchups further down the lineup. The Charlie Coyle-Danton Heinen-Marcus Johansson line has seen a healthy serving of the David Perron and Ryan O’Reilly tandem (this duo has played with a mix of Sammy Blais, Zach Sanford and even Tyler Bozak; anchored predominantly by Brandon Carlo and Torey Krug). That has left the Jake DeBrusk-David Krejci-David Backes grouping – along with the Boston’s third pairing – to take on Alex Steen’s line.

I suspect both the Bruins and Blues are comfortable from a matchup perspective because both teams are considerably deep and have shown that they are willing to regularly play all four lines. But for a head coach with home ice, the chess game tends to start with taking the other team’s strongest firepower out of the equation. For Boston, that means throwing your best two-way tandems and possession-dominant players against a dangerous St. Louis line that only needs a handful of opportunities in a game to find the score sheet.

There are many storylines to follow heading into what should be a highly entertaining, winner-take-all Game 7 on Wednesday night, but how Boston attempts to take St. Louis’ best line out of the equation may be the most fascinating. If you study the three previous Boston home games in the series, it would seem the playbook has already been written.