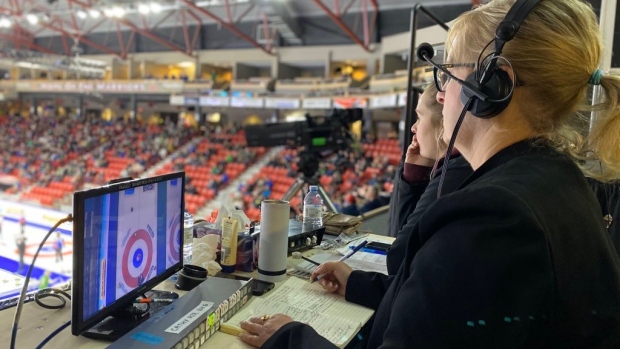 MOOSE JAW, Sask. - Cathy Gauthier is both exhausted and elated.

“I’ve been a complete nocturnal animal for the last week,” joked the TSN curling commentator Saturday morning ahead of the playoffs at the Canadian women’s curling championship.

For the past seven days, Gauthier has been part of the broadcast team covering the 2020 Scotties Tournament of Hearts in Moose Jaw, Sask. She’s called the morning draws in the booth with colleague Bryan Mudryk before jumping on the update desk for the afternoon and evening games. Nine hours of live television is tiring enough by itself. When you add multiple middle-of-the-night curling matches that had a far deeper personal meeting than anything going on at Mosaic Place, it must have been extremely emotionally draining.

Gauthier’s son Jacques was skipping Canada in his first world junior curling championship this week on the other side of the world in Krasnoyarsk, Russia. Krasnoyarsk is 13 hours ahead, meaning Jacques’ games were usually played at 2 a.m. or 6 a.m. Moose Jaw time. Despite working long days at the rink, Gauthier was simply not going to miss any of her son’s once-in-a-lifetime moment and says she got three-four hours of sleep per night at best.

“It’s also an adrenaline thing. Your kid is doing really well and you just don’t want to miss a thing,” she said.

Not all games were streamed on the web, so Karlee Burgess, Jacques’ girlfriend and member of the Canadian junior women’s team that was competing in Russia, did her best to shoot live video for Cathy and other family members wanting to watch the late-night action. Once security eventually shut that down, Gauthier turned to live rock-by-rock updates on the world curling federation’s website.

“I think in some ways it would have been easier if it was just line scores,” explained Gauthier. “I would have probably thought just go to bed. I kept telling myself you can’t influence the outcome. I couldn’t even if he was here. But, when you can actually see the rock-by-rock, it was pretty hard to not want to watch it all.”

It was all worth it in the end as Gauthier and his team of third Jordan Peters, second Brayden Payette and lead Zachary Bilawka defeated Switzerland in the final Friday night to become world junior champions. 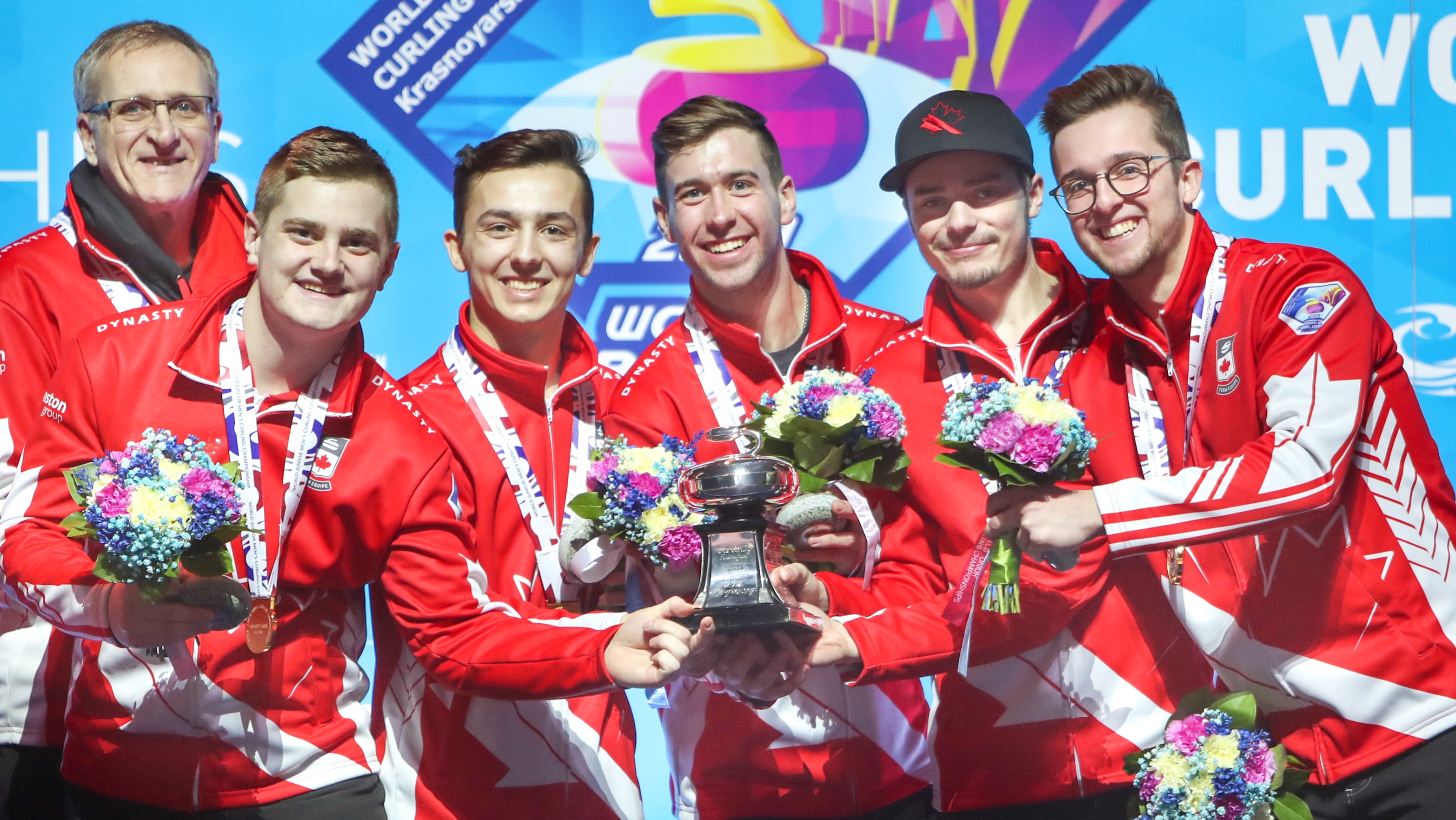 After Friday’s broadcast, some of the TSN Curling broadcasting crew huddled around Gauthier’s iPad on the update desk to watch her son take a lead 7-1. Once she got back to the hotel room he was a world champion.

“I always think about Brad Gushue winning the Olympics and holding his phone against his head and saying to the TV ‘mom, hang up. It’s me,’ because everybody was calling Brad’s mom,” said Gauthier. “It was one of those moments and then we just FaceTimed for about an hour this morning. He’s exhausted. He’s such a high energy kid, he was overwhelmed, he’s exhausted, but he’s just so happy and I couldn’t be happier for him.”

Gauthier is overwhelmed by the amount of support she and her son received during the week Moose Jaw. Curlers like Jennifer Jones and Rachel Homan, icemaker Greg Ewasko and TSN colleagues sent messages of encouragement to Jacques in Russia.

“These little video clips sent that came from Moose Jaw meant the world to him. Those things he said made a world of difference because they are a world away and they know people are cheering for them, but when they got those video messages it meant a lot to them and that really helped,” said Gauthier. “So between the Moose Jaw fans and curlers here at the Scotties sending shoutouts to them, I just really felt I was surrounded by a really big sense of family cheering for my kid.” 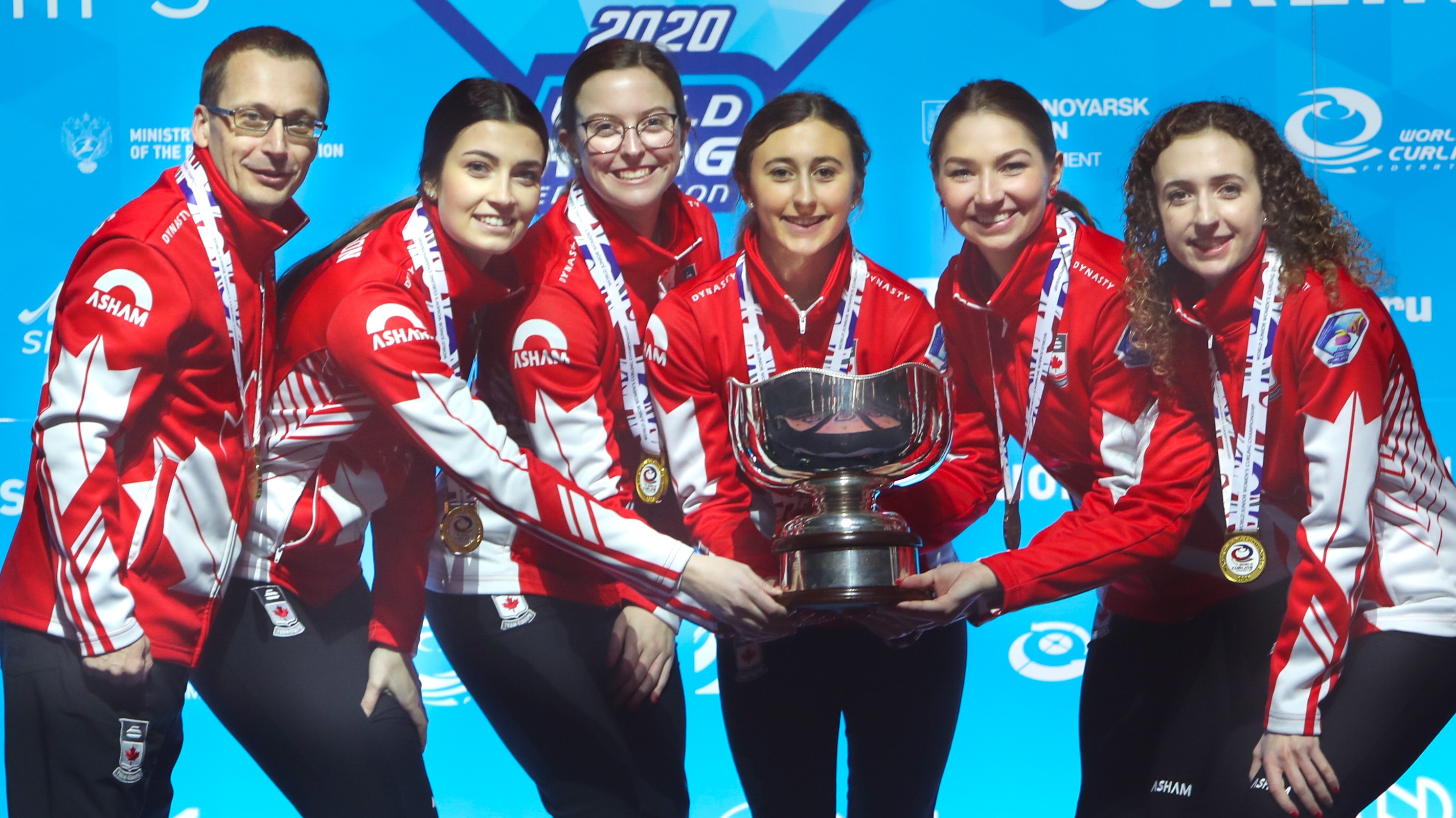 On the women’s side, Mackenzie Zacharias also led Canada to the gold medal after upsetting South Korea’s Kim Min-ji, who won bronze at the women’s world championships in 2019. This was the third world junior title for Jacques’ girlfriend Burgess, the vice on the team.

Both rinks play out of Manitoba and will be arriving together at the Winnipeg airport midnight Sunday with family and friends waiting patiently holding Canadian flags and signs. Gauthier knows the moment will be emotional.

During her playing career, Gauthier won three national titles, including one in 2005 with Jennifer Jones when the skipper made an incredible in-off to score four and stun Ontario’s Jenn Hanna on the final shot. Despite being part of one of the greatest moments in Tournament of Hearts history, Gauthier says this one in Moose Jaw is right up there.

“I think about my favourite Scotties and they were ones I played in or ones that you seen amazing shots, but this Scotties I will never ever forget because not did I get the chance to cover another Scotties, but it’s when my son won the world title,” she said.

This was Jacques' last year in juniors. Gauthier says the team struggled early this season. Then everything turned around at the Canadian championship in Langley, B.C., last month. Jacques lost just once all week before beating Newfoundland and Labrador in the final, shooting 88 per cent.

And who was in the booth to call the game? No other than his own mother, of course.

“When I look back at this year, getting to call his game with Bryan [Mudryk] and watching your kid throw a shot to win a Canadian title was amazing,” said Gauthier. “And this journey has continued. I don’t even know how to describe this year other than just unreal.”

Gauthier has a few days of celebration before she hits the road for the Tim Hortons Brier in Kingston, Ont., next week. We’ll have to wait and see if she’ll have the opportunity to call her son’s games at that bonspiel one day.