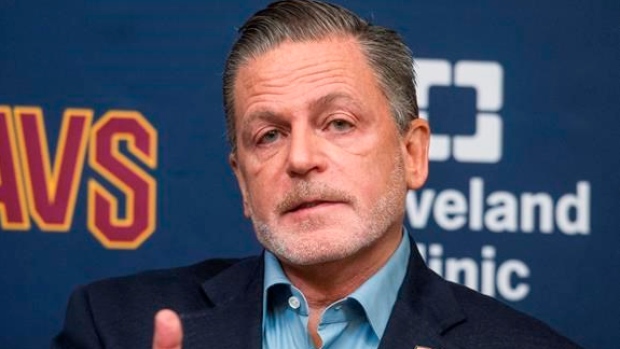 CLEVELAND — Cavaliers owner Dan Gilbert was released from a Detroit-area hospital nearly a month after suffering a stroke and will recover at an in-patient rehabilitation centre.

Quicken Loans CEO Jay Farner said Gilbert was discharged Wednesday from Beaumont Hospital in Royal Oak, Michigan. The 57-year-old Gilbert was taken to the hospital by a family friend while experiencing stroke-like symptoms on May 26.

He suffered the stroke while under medical care and was taken into surgery for a catheter-based procedure.

Altman said he was able to FaceTime with Gilbert earlier in the day.

"For the first time in a couple weeks I was able to talk to him," Altman said. "He looks great, he's doing really well. We got to talk to him about our vision and plan, none of which has changed much. That was really, really positive and exciting, sort of gave us more of a jolt of energy and goodwill."

"Dan's on the path to recovery," he said. "It's still going to be a long recovery. His mind's still intact and he still sounded like Dan, which is super aggressive and go after this thing. So great news there and a shout-out to the Gilbert family, who has been through so much these past few weeks. He was with us and his kids were with today and it was a great day for us and them."

Gilbert has owned the Cavs since 2005. A father of five, he founded Quicken Loans, the nation's largest online mortgage lender. Gilbert has built a billion dollar business empire with numerous company holdings in Ohio and Michigan. He's led urban development projects in Detroit and Cleveland.