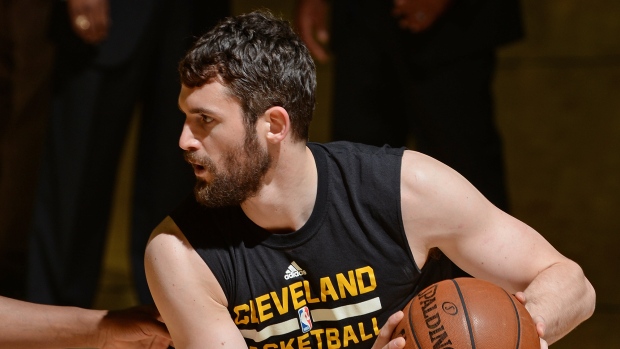 Cleveland Cavaliers forward Kevin Love (concussion) is listed as out for Game 3 of the NBA Finals.

Love will remain in the NBA concussion protocol under the direct supervision and oversight of team physician Dr. Alfred Cianflocco, Dr. Jeffery Kutcher of the NBA and Cavs head athletic trainer Steve Spiro.

His status for Game 4 will be updated at the appropriate time.

Love has been following the league's concussion protocol since he was diagnosed with the head injury, a result of him taking an elbow to the back of the head from Warriors forward Harrison Barnes as they were battling underneath for a rebound.

According to the protocol, Love is required to gradually increase his physical activity and remain symptom free before he can be cleared to play by both a league and team doctor.

Love, who wasn't on the floor with his teammates when the media was allowed inside at the end of Cleveland's shootaround, is averaging 16.5 points and a team-leading 9.4 rebounds in 16 post-season games. The 27-year-old missed the finals last year after dislocating his left shoulder earlier in the playoffs and undergoing surgery.

Coach Tyronn Lue has a few options in place of Love. Forward Richard Jefferson was wearing a red jersey - designated for starters - following the workout.

After he became dizzy while playing defence in the third quarter, Love took himself out of Sunday's game and wasn't around for the finish of Cleveland's 110-77 loss.

The Cavs were overwhelmed on the road by the Warriors in the first two games, but they are hoping a return to Quicken Loans Arena, where they are 7-0 in these playoffs, can help turn the series around.

"We've been a pretty good home team all year," LeBron James said. "We understand how important it is to protect home court, so we look forward to the challenge. We got a great team coming into our building. They feel good about their chances and we do as well, so it's going to be a great atmosphere."