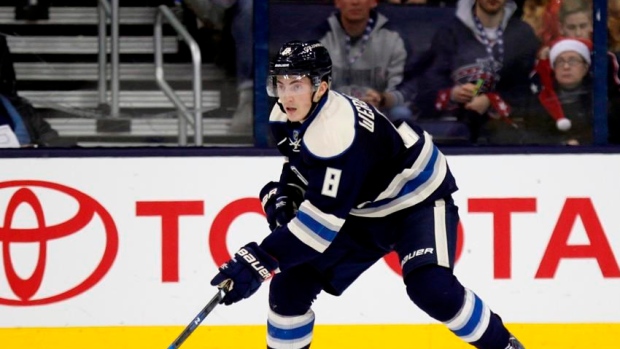 Columbus Blue Jackets defenceman Zach Werenski underwent shoulder surgery on Thursday and has been given a five-to-six month timeline for recovery.

Despite the timeline, which puts his return anywhere from early October to early November, the team release said Werenski is expected to be ready in time for the start of 2018-19 season.

"Zach has been dealing with this injury since early in the season and while he was able to play through it, our medical team determined that surgery was the best option at this time," said Blue Jackets general manager Jarmo Kekalainen. "The surgery went very well and the expectation is Zach will be ready to play by the start of the season or shortly thereafter."

Werenski's timeline for recovery (5-6 mos) means he's likely to miss most, if not all, of training camp (on-ice stuff) plus possibly the start of the regular season.

Five to six is either October or November, but he could always heal quicker than expected too.

Werenski, a Calder Trophy finalist last year, spent almost the entire season playing through the injury, which he sustained on October 30. He managed to record 16 goals - fourth-most among NHL defencemen - and 37 points in 77 games this season, and added one goal and three points in six playoff games.

The 20-year-old finished second on the team in average ice time during the regular season at 22:35 per game. In his exit interview last month, Werenski said he did not consider shutting himself down for the season.

"No. Obviously, I want to play," Werenski told the team website. "I missed a little time at Christmas there. That's all I needed to feel good enough to play, but it definitely sucked for sure."

He said the injury impacted his ability to take slap shots, a part of his game he had worked on in the previous off-season.