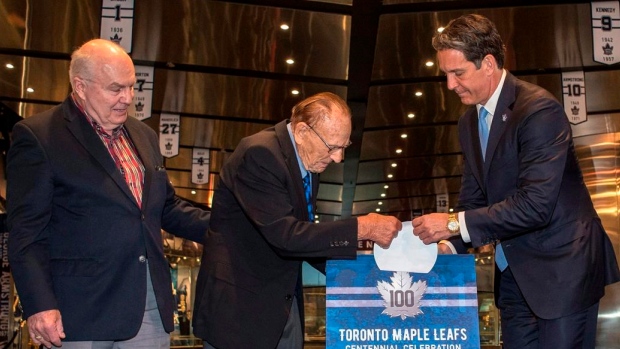 TORONTO — Two players from the Toronto's last Stanley Cup championship team looked on as Brendan Shanahan etched out his plan for bringing the Maple Leafs back to glory.

Johnny Bower and Ron Ellis sat in attendance at the Hockey Hall of Fame as Shanahan announced plans for the Leafs' centennial season, as well as a blueprint for the start of the club's next 100 years.

"We want to put the Toronto Maple Leafs back in their rightful place," Shanahan said.

What that means for next season is progress.

Shanahan, establishing himself as a pragmatic leader over two-plus years in Toronto, wouldn't say progress meant a return to the post-season for the Leafs, who haven't won a Cup since 1967. He promised only forward steps for an organization that is likely to be flooding with youth next season.

"Our goal is to really just be the best that we can be," Shanahan said, speaking from the Hall of Fame's new Maple Leafs centennial exhibit. "I don't think we stand here on this day and sort of set any limitations to us.

"It's just really the beginning of the process for so many of our young players.

"We had a lot of good things last year obviously and I think that we're pointing the right direction with a lot of the work from Mike Babcock and Lou Lamoriello. And now it's just a matter of growing and growing together."

Though they finished 30th in the NHL, last year went according to plan for the Leafs.

Babcock demonstrated his coaching prowess, the team's youngest talents shown signs of promise and personnel from old rosters was painlessly shuffled out for future assets, namely captain Dion Phaneuf, who was dealt to Ottawa in February.

Shanahan said progress for next season would mean continuing to "add our own players into the lineup, inject some of our youth that we saw toward the end of last season. And just continuing to make forward steps."

Toronto could start next season with more than a handful of rookies cultivated during the Shanahan era, including No. 1 overall pick Auston Matthews, 20-year-old William Nylander, and London Knights star Mitch Marner.

Also due to join the fold is new No. 1 goaltender Frederik Andersen.

With more speed, skill and youth on their roster, the Leafs are likely to show better than last year's 69-point season, though a playoff berth is perhaps an unrealistic expectation.

Just as they transition toward the future on the ice, the Leafs will also be sporting a new logo and redesigned sweaters, all of it to celebrate the centennial season of the hockey club.

The Leafs presented a centennial anniversary logo (to be placed on players' helmets) and announced plans to create new banners for players who have had their numbers honoured in the past.

The original 18 banners of those players will be delivered to their respective hometowns.

The Leafs will also publicly unveil statues on Legends Row, outside the Air Canada Centre, for Dave Keon, Tim Horton and Turk Broda, and, as previously announced, face off with the Detroit Red Wings in the NHL Centennial Classic at BMO Field on Jan. 1.

On a day that celebrated the past while pointing ahead to the future, Shanahan was asked if more pain lay ahead for the Maple Leafs.

"I think quite honestly until the day you actually get handed the Stanley Cup it gets harder and harder," he said. "The only time you can really say there's no pain and today's a good day is the day somebody actually hands you the Stanley Cup because you've earned it."