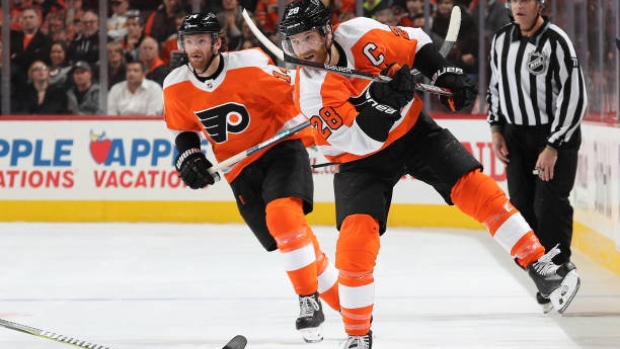 A linesman orders Sean Couturier out of the faceoff circle and Claude Giroux shrugs before stepping in and winning the draw.

Two centres on the ice at once is a nice luxury for the Philadelphia Flyers to have.

"He's one of the best in the league at faceoffs," Couturier said of Giroux, who ranks third in the NHL. "When you start with the puck, it's a huge part of the game."

Beyond just controlling faceoffs, having depth at centre is a growing factor for success in the NHL. Contenders like the Flyers, Tampa Bay Lightning, Nashville Predators, Winnipeg Jets and two-time defending Stanley Cup champion Pittsburgh Penguins all boast depth down the middle and are spreading centres all over the lineup.

The flexibility gives teams potentially game-altering matchups with the playoffs coming up in a month.

"You can never have enough centre-ice men on your team for lots of reasons," Penguins coach Mike Sullivan said.

Crucial faceoffs, injuries and defensive-zone coverage are many of the reasons to load up on centres who can almost always shift to wing and not miss a beat. Philadelphia has long followed the model of drafting and acquiring centres and moving them around, and now has nine natural centres on its roster.

The Penguins won the 2009 Stanley Cup going with Sidney Crosby, Evgeni Malkin, Jordan Staal and Max Talbot down the middle and captured it the past two years with Crosby, Malkin, Nick Bonino and Matt Cullen. The free agent departures of Bonino and Cullen left a void that Pittsburgh filled by trading for Derick Brassard and Riley Sheahan to again look like a championship contender.

"To have the depth that we have at this point at the centre-ice position is I think an important aspect of our overall game," Sullivan said. "We didn't have that coming into training camp. I think our general manager, Jim (Rutherford), has worked extremely hard at making sure that he gave us what has become now I think a strength of our team."

It's also a strength of the Eastern Conference-leading Lightning, who are overflowing with centre options beyond Steven Stamkos, Alex Killorn and trade-deadline pickup J.T. Miller. The Toronto Maple Leafs also roll deep with forwards who play centre or have in the past, including Patrick Marleau and recent acquisition Tomas Plekanec.

"I can get a can't-miss matchup," Toronto coach Mike Babcock said. "You're not scared of any matchup as time goes on."

It's all about the matchups in the arms race that is the absurd Central Division. It wasn't good enough that the Central-leading Predators had Ryan Johansen, signed Bonino last summer and traded for Kyle Turris in November; they welcomed centre Mike Fisher back from retirement and still have Colton Sissons and Craig Smith.

The Jets acquired centre Paul Stastny from the St. Louis Blues to add to an already forward-heavy roster. It paid immediate dividends with Patrik Laine extending his point streak to 13 games and Winnipeg cruising along after Mark Scheifele went down with an injury.

"We'll be putting two centres out there for D-zone draws and whatnot," said Andrew Copp, who thinks Winnipeg's centre depth stacks up with the best in the league. "That's really important, and then just depth with injuries. ... Now we've got six, seven, eight guys that we can really lean on."

It's an increasingly popular strategy. The Flyers are vying for the league lead in faceoffs, handling the early-season crackdown on faceoff violations and compensating for a young, mostly unproven defence with versatile forwards.

"Being strong up the middle is important," coach Dave Hakstol said. "That's the backbone of every line, so to have guys that are comfortable in that spot I think is important. Playing down low in your zone — there's so much switching and interchanging that goes on from the wing to that down-low position in coverage, having somebody that's comfortable being down there I think is a benefit, as well."

Two centres are better than one not just for faceoffs but because the extra responsibilities of the position allow for better awareness in the defensive zone, where wingers typically are only tasked with defending their respective opposing winger in man-to-man schemes. Giroux shifted to wing on the top line with Couturier after spending the past eight-plus years at centre and is approaching his career high in points and playing some of the best hockey of his career.

"We get a read off each other," said Couturier, a leading candidate for the Selke Trophy as the NHL's best defensive forward. "It's about chemistry and trying to trust each other out there. Guys can fill in different roles and it's nice and it helps the team. That's what you kind of want from having so many centremen is you want to fill in each other's roles."

Having extra centres is a substantial benefit — if they can handle the position change. Winnipeg captain Blake Wheeler made a rapid adjustment from wing to centre amid injuries, but just about everyone agrees it's much easier to go the other way.

"There's a real quick adjustment to going from centre to the wing: figure out how to work the walls and find your point men," Jets coach Paul Maurice said. "That's a very difficult change."