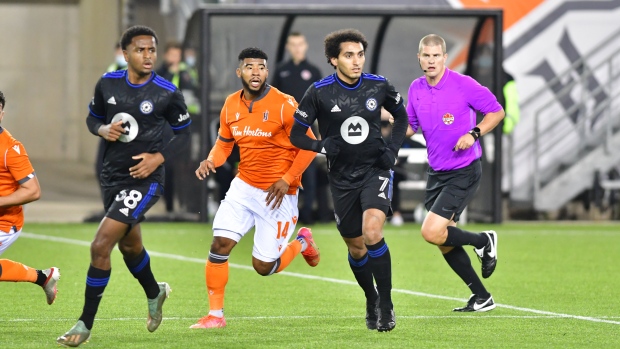 After a 0-0 draw against FC Forge, the visiting 'keeper ended a marathon 11 rounds of penalty kicks when Breza slipped a shot past his counterpart Triston Henry to send CF Montreal back to the Voyageurs Cup final.

Breza and Montreal will play the winner of the second semifinal between Toronto FC and Pacific FC at BMO Field on Nov. 3.

After Breza stopped Henry to begin the 11th round of penalties, Breza appeared surprised he was summoned to take Montreal's next kick. He pointed to his teammates peering in from inside the centre circle.

"I had no idea I was shooting," Breza said. "I was looking at our team to see who hadn't shot.

"I just wanted to score, so we go home, celebrating on the plane and thinking about the final. Nowadays, 'keepers use their feet as well, so it's not like we can't kick. I just wanted to make the net move."

CF Montreal is the defending Voyageur Cup champion, having won the title in 2019. There was no Canadian Championship competition last year because of the COVID-19 pandemic.

"This was crazy because this year we've had a lot of things happen for the first time," Montreal head coach Wilfried Nancy said.

"It was the first time for me to see it end like this, so I'm going to remember this."

Forge FC captain Kyle Bekker would rather forget the way his team's semifinal ended. The home side was trying to become the first Canadian Premier League team to advance to the Voyageurs Cup final.

"We deserved a lot more," Bekker said. "We played a fantastic 90 minutes, and it took 11 PKs to beat us. So it is a little harsh at the end of the day. But that's the reality."

Forge FC mustered 13 shots, five on target to Montreal's five shots and only two on Henry.

"We were good for the win in the 90 minutes, and it doesn't come," Forge coach Bobby Smyrniotis said. "When you get into penalties, a little bit, Russian roulette.

"I thought it was important for us to be a little bit higher up the field against a team that likes to get on the ball and get into a rhythm.

"We didn't really give them much to be able to come out of their back end made it very difficult for them, and that way it kept a lot of the game in their field for spells."

Forge FC carried its solid play at the end of the opening half into the final 45 minutes with a couple of early chances.

Kwame Awuah's long-shot narrowly missed the far post. Then, in the 49th minute, Mo Babouli slid a pass that Emery Welshman failed to redirect from in close.

Breza made a diving stop on Borges, curling left to right shot from just outside the box in the 62nd minute.

Forge (13-8-2) sits third in the Canadian Premier League table with 41 points, three behind the leader, Cavalry FC and one point shy of second-place Pacific FC.

After a disheartening 1-1 draw in Toronto on Saturday, in which Toronto FC scored in stoppage time, Montreal (11-10-10) dropped to eighth in the MLS Eastern Conference, just below the playoff line.