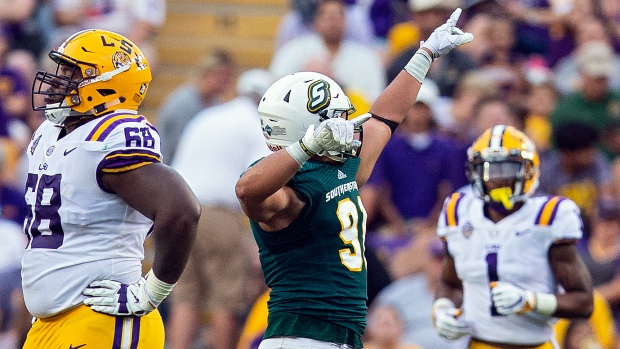 For nearly 40 years, Dartmouth, NS.,​ has been mentioned as a potential stadium site for a CFL expansion team in Atlantic Canada. But it seems Dartmouth has grown tired of waiting for the CFL to come to them, so Dartmouth is coming to the CFL, in the form of defensive end Isaac Adeyemi-Berglund.

It’s expected that the six-foot-one, 245-pound pass rusher will become just the sixth Nova Scotian in the last 30 years to be selected in the first round of the CFL Draft on Thursday. But, much like the city that he calls home, it hasn’t always been easy for Adeyemi-Berglund to capture the attention of the football world.

After graduating from Dartmouth High School, it took a year of CÉGEP football in Quebec to land a scholarship to Southeastern Louisiana University, an FCS school in the United States. Then, even after a breakout six-sack junior season at SE Louisiana, he still wasn’t on the CFL’s radar. In fact, he was so off the radar that his name wasn’t even on the initial version of the 2020 Draft eligibility list, let alone appearing in the Fall Edition of the CFL Scouting Bureau rankings.

Another 7.5 sacks as a senior, including two against SEC team Ole Miss, made him impossible to overlook. He earned the No. 17 spot in the Winter Scouting Bureau rankings and, by the time the Spring Edition was released a few weeks ago, he had climbed to No. 12. It’s a good bet that one of the draft’s fastest rising prospects will go even higher on Draft Day.