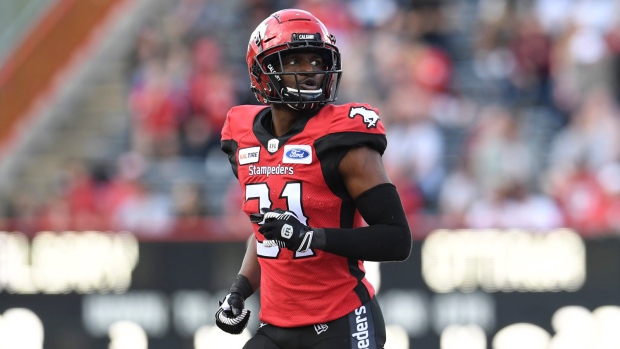 After two superb seasons in Canada, NFL teams are lining up to get a closer look at Calgary Stampeders defensive back Tre Roberson.

Roberson has 14 NFL workouts scheduled between the start of next week and the end of the month, a sign that he will likely have his choice of several NFL opportunities.

The only problem is that no one knows if he will be allowed to work out or sign with an NFL team – not the CFL, or the NFL clubs who have booked him for workouts, nor his agent.

CFL players were supposedly granted the right to work out and sign for NFL teams as part of the new CBA signed back in May, through the re-introduction of something known as the NFL window. However, the NFL hasn’t signed off on conditions that come with that provision, which means players like Roberson are stuck in limbo.

“No one knows what’s going on,” said Cameron Weiss, Roberson's California-based agent. “I’ve been working on these workouts for three months and to not have them – potentially – is devastating for [Roberson]. It’s very, very frustrating.”

The CFL announced in August of 2018 that all players entering the option years of their contracts would be allowed an NFL window to work out or sign with NFL teams. When the CFL struck a new collective bargaining agreement with its players last spring, that right was extended to all CFL players, regardless of what stage of their contracts they were in.

But the NFL never agreed to the conditions the CFL wants attached to letting players free from their contracts, including that players must make an active NFL roster, not a practice roster. The CFL is also insisting that players who fail to make an NFL roster have their playing rights revert to their CFL clubs after clearing NFL waivers.

The conditions the CFL wants to apply are the same ones that existed when the NFL window was part of the CBA (the window was removed as part of the agreement signed in 2010). What has changed is the NFL’s stance on being willing to accept those conditions.

With no agreement in place on the outstanding issues, the NFL recently informed its teams that they are not allowed to work out or sign CFL players whose contracts have not expired.

“Last Friday I got a phone call from someone in an NFL [team] front office saying he’d got a memo from the NFL front office and we’re confused about whether we can work out Tre,” said Weiss. “Since then it’s been hurry up and wait, like [teams saying] ‘We’ll probably get this ironed out, just be patient.”

A big concern for CFL teams is that granting players their full release would allow players to sign an NFL contract, get cut, and then can sell their services to other teams in the CFL without honouring the term remaining on their previous CFL contract.

A possible solution would be for the CFL to simply require that any player released from his contract to sign in the NFL must return to that same club to finish his CFL deal if he wants to return to Canada during the term of that contract.

A compromise is less obvious when it comes to the matter of the CFL not wanting to free its best players to sit on NFL practice rosters.

NFL teams would undoubtedly like the flexibility of placing players on the active or practice rosters, and players would certainly like the choice. But the CFL has been adamant that its best players would only be freed to play in the NFL, not practice, despite the fact that an NFL practice roster salary is $8,000 (U.S.) per week, roughly double the average CFL salary.

CFL commissioner Randy Ambrosie said during Grey Cup week that solving the NFL window stalemate was a top priority for the early off-season. But with Roberson’s NFL workouts scheduled to begin soon, Weiss may have few options if there remains no deal between the two leagues by next week.

“I’m going to raise hell [with both the CFL and NFL],” said Weiss. “We’ve tried working through all the various channels to this point, but it seems like not a lot of people are on the same page here.”

If the matter remains unresolved, it’s possible the CFL could be dealing with grievances or even lawsuits from players seeking freedom.