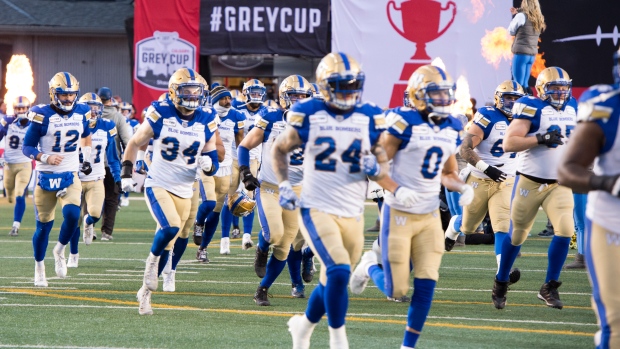 In 2019, the Winnipeg Blue Bombers did things the hard way.

They had their star running back suspended mid-season over a positive drug result. They started three different quarterbacks for significant chunks of the season. And despite winning 11 games, they finished third in the West Division, setting up a path to the Grey Cup that required them to win back-to-back road games.

The only thing they made look easy was their dominating 33-12 win over favoured Hamilton in the 107th Grey Cup game, snapping the CFL’s longest championship drought.

Winnipeg won with a formula of a great playmaking defence, ball security and a run game that was second to none.

The Bombers’ disruptive defence saved its best for last. Willie Jefferson, the mammoth defensive end, led the way with three sacks and two forced fumbles in the Grey Cup game. Winnipeg never surrendered more than 14 points in consecutive playoff wins over Calgary, Saskatchewan, and Hamilton – three of the four highest-scoring teams in the league.

The Bombers in 2019 also managed the trick of winning while using three different quarterbacks. Starter Matt Nichols went down with a season-ending shoulder injury in the ninth game of the season and was replaced by Chris Streveler, who provided occasionally thrilling yet inconsistent play down the stretch.

Four days after Winnipeg scored just six points against Saskatchewan in their third consecutive loss, the Bombers pulled the trigger on a deal with Toronto for Zach Collaros, who hadn’t played since suffering a concussion during the opening week of the season when he was with the Roughriders.

Ten days after the trade, Streveler suffered an ankle injury. The keys to the offence were turned over to Collaros, who started Winnipeg’s final game of the regular season and then all three playoff games.

The nature of playing quarterback makes late-season trades rare and usually fruitless. All of which made Collaros’ performance over Winnipeg’s final four games that much more remarkable.

There was a bit of serendipity involved in the Bombers’ championship narrative. In the days leading up to the CFL’s October trade deadline, then Toronto GM Jim Popp had negotiated an extension with the Argos for Collaros.

The two sides had agreed on the terms, but the deal hadn’t been approved by team president Bill Manning, who fired Popp before pen was put to paper on the deal.

Toronto’s newly hired management team of Pinball Clemons and John Murphy instead dealt Collaros to Winnipeg in a deal that involved only the exchange of draft picks.

The BC Lions’ 55-8 win over Toronto on Oct. 5 that triggered Popp’s firing ultimately kept Collaros from being extended by Toronto and put him on the trade market, giving the Bombers a rare chance to pounce.

It was a short journey for Collaros to winning a Grey Cup as a Blue Bomber, but a long one for a lot of others within the team and the organization.

General manager Kyle Walters and head coach Mike O’Shea had spent six years building together, including going 12-24 during their first two seasons. A dubious record like that, at least with some organizations, is enough to get you fired.

The emergence of Nichols at quarterback in 2016 led to three seasons of double-digit wins but three years of playoff losses without reaching a Grey Cup. Then it all came together in 2019, a combination of hard work, a touch of luck and a lot of perseverance.

It was a championship built over time, a product of the commitment and patience necessary to see it through.

What they’ve been up to since we last saw them

After completing their fourth consecutive season of double-digit wins, the Blue Bombers have focused on maintaining consistency since the end of the 2019 season.

The Bombers signed both Collaros and Jefferson to new deals after the 2019 season, deals which they later restructured to keep the roster intact amid the pressure of cutting roughly $500,000 in salary for 2021. Other prominent players, such as Harris and linebacker Adam Bighill, re-did their deals for this season as well.

The Bombers got a recent bonus when Canadian defensive lineman Jonathan Kongbo rejoined Winnipeg after spending last season trying to stick in the NFL.

There will be holes to fill, especially in the secondary and on special teams with the retirement of punter/kicker Justin Medlock.

For the most part, the Blue Bomber team that takes the field on Aug. 5 will look very much like the one that walked off the field 20 months ago with a feeling of mission accomplished.