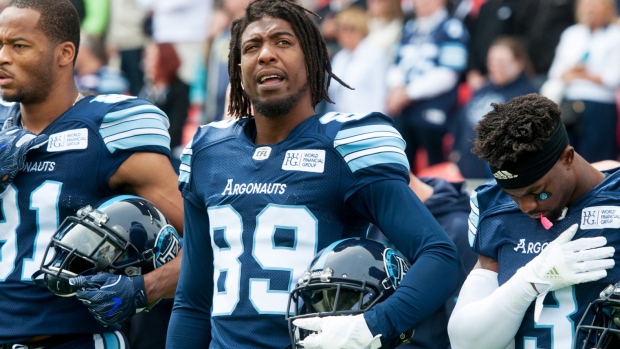 Debate surrounding the rule change first arose after Justin Dunk of 3DownNation reported on Saturday that the CFL and the CFLPA are “in favour” or reducing the ratio, which currently mandates that seven of a team’s 24 starters on offence and defence must be national players, down to five players.

According to Dunk, the subject of the ratio being lowered was discussed by both sides during recent collective bargain agreement negations in Toronto.

Since the report, Carter and many other players have taken to Twitter to chime in on the possible change. The international wide receiver has made it pretty clear on Monday that he very much hopes the ratio will be lowered.

Come on y’all... We all know the real... yes, there are very good Canadian players and always will be... but until Canadians grow up in a competitive environment like American players do, they are at a disadvantage... And who the hell gon play QB for every team Bridge 😂😂😂😂😂

And how good were you??? I not about to hop in a silly ass argument... bra I been on the same field as you 😂😂😂 they was wasn’t coming to see you either!!! Like, come on guy https://t.co/xGwPBx5IVC

Carter also doubled-up by tweeting that Foley was “lucky” that the ratio rule was in place, suggesting that Foley wouldn’t have played in the CFL if the rule were not in place.

Yeah he is 😂😂😂 he is lucky he got that ratio in his favor... cause last time I checked he was in the same damn boat as everyone else... CFL been around way before us and will keep on changing to stay around https://t.co/hKKRj84IuT

The receiver also replied to a tweet from Winnipeg Blue Bombers running back Andrew Harris that referred to the Alliance of American Football and XFL as being viable options for international CFL players:

I hope you doing some extra push-ups... they gon be on your head now 😂😂😂 welcome to the club Sir! Hope you can handle it https://t.co/wqvdssPqd0

A potential change to the ratio is obviously a hot-button topic, and it's got players from all around the league weighing in.

I say reduce the ratio by 1 max. This is the "Canadian Football League" so I believe having canadians on the field is important. That being said we do need to invest more in the development of young Canadian players.

weren’t you an nfl reject too? Stop it. Cfl isnt even a Canadians first choice league. I don’t care about ratio whatsoever. Have as many Canadians as you want but if he is a backing me up at my position. No way he should be making more than me. Period. No other league does that.

This tweet right here is the reason why the ratio should be changed I rest my case ! ✌🏾 https://t.co/hpP8nBEDgq

Following Dunk’s report on Saturday, CFLPA executive director Brian Ramsay took to Twitter to call the report “completely and utterly false, and simply untrue” in a series of tweets.

Our bargaining team has been very clear and maintains that negotiations to date have consisted of process and exchange of proposals only. 2/4

The CFLPA and its bargaining committee continue to work hard to find solutions to address the many needs and concerns of all CFL players. We will continue to be as transparent and available as possible. 4/4

According to TSN CFL Reporter Matthew Scianitti, the next round of CBA discussions between the CFL and CFLPA are taking place today and tomorrow in Calgary.