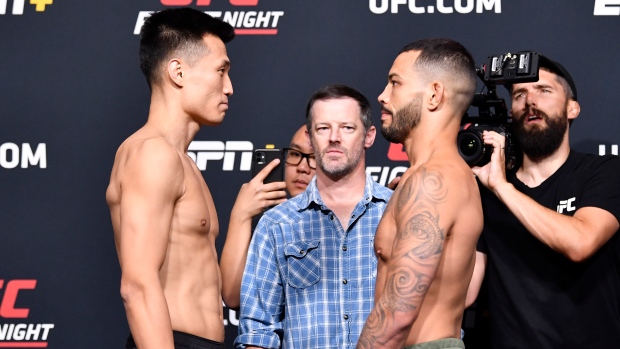 “The Korean Zombie” Chan Sung Jung had his path back to a title shot in the UFC’s featherweight division derailed in his last bout when he lost to Brian Ortega.  He will look to reignite that chase on Saturday against Dan Ige in the main event of Fight Night in Las Vegas.

Jung had his title opportunity in 2013 when he lost to José Aldo at UFC 163 in Brazil.

Since that defeat, the 32-year-old has posted a 3-2 record and earned post-fight bonuses in four of those fight bouts.

Jung is the No. 4-ranked fighter in the featherweight division.

Ige is also working towards a title shot and is coming into the main event bout off a victory over Canadian Gavin Tucker at Fight Night in March.

That victory, a :22 second knockout, got the 29-year-old back in the winning column after a loss to Calvin Kattar in July of 2020 snapped his six-fight winning streak.

The Hawaii native has eagerly anticipated this matchup and believes that fans are going to get a show on Saturday night.

“The Korean Zombie is a guy I’ve been looking up to my whole entire fighting career,” Ige told TSN. “Just his fighting style, the way he comes in, the way he brawls, his submission game, his wrestling game, pretty much his whole entire fighting style, I’ve always been a big fan of him and it’s pretty awesome to be able to go toe-to-toe with a guy like The Zombie and I can’t be more pumped for this fight.”

Ige, the No. 8-ranked featherweight, is 7-2 in his UFC career after he earned his place in the promotion with a victory over Luis Gomez on Dana White’s Contenders Series in 2017.

In the co-main event, Aleksei Oleinik will meet Sergey Spivak in a heavyweight bout.

Oleinik has dropped his last two fights to Derrick Lewis and Chris Daukaus, suffering TKO defeats in both cases.

Prior to those setbacks, the 43-year-old was riding a two-fight winning streak with victories over Maurice Greene and Fabrício Werdum.

Oleinik is a veteran of 75 professional MMA bouts and holds an 8-6 record since joining the UFC.

The 26-year-old has a 3-2 record since making his UFC debut on a Fight Night card in Ottawa against Walt Harris.